9 REASONS to CALM DOWN: Pope Francis is still Catholic 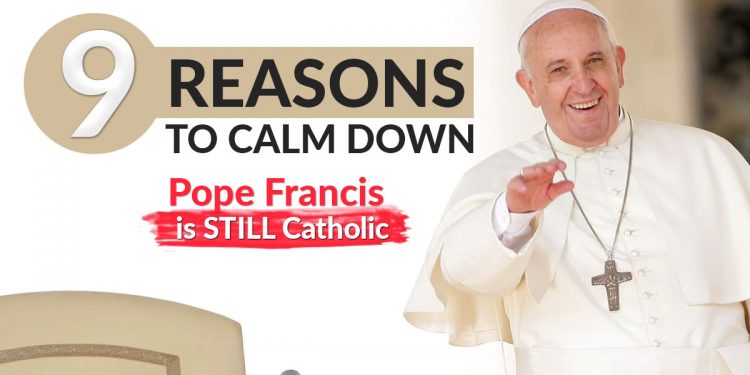 Hello All! And God bless you! Just a quick response to the recent kerfuffle concerning Pope Francis and “civil unions” for homosexual couples. Because this one is really quite simple, I can do this in eight short points.

There are other possibilities, but for brevity’s sake, I will leave it at this. As Bishop Strickland just said on Catholic Answers Live the other day, everybody take a deep breath. We are in this thing for the long haul. These things will be clarified. The Holy See will clarify, folks. In the meantime, I wish folks would stop with the “heretic” bombs. Stop with concluding the absolute worst possible scenario when there is no real evidence to do so. Jesus is still Lord. And Francis is still his Vicar. I, for one, can’t wait to see how our Blessed Lord is going to work this out! And isn’t it good to know Jesus said, “I will build my Church and the gates of Hell shall not prevail against it?”

It’s so good to be Catholic!