Are All Christians Saints? 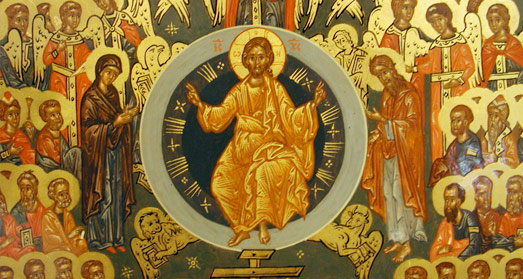 Paul, an apostle of Christ Jesus by the will of God, and Timothy our brother, to the saints and faithful brethren in Christ at Colossae: Grace to you and peace from God our Father.

The question is: why do Catholics only refer to canonized “saints” in heaven as “saints” when St. Paul seems to refer to all Christians as “saints”?

And when [the Lamb, Jesus Christ] had taken the scroll, the four living creatures and the twenty-four elders fell down before the Lamb, each holding a harp, and with golden bowls full of incense, which are the prayers of the saints…

Here, we have “the twenty-four elders,” representing the people of God from both Old and New Covenants (12 Patriarchs + 12 apostles = “24 elders”) receiving and communicating “the prayers of the saints” ascending from earth as incense. So again, we have Christians this side of the veil referred to as “saints.”

Some Catholics will argue the term “saints” is being used in the sense of an aspiration. St. Paul wills the Colossians to be saints so he refers to them here in accordance with their ultimate calling rather than their present state. I have never found that line of reasoning to be compelling. It doesn’t seem to work for either text, especially Rev. 5:8.

But even more importantly, that doesn’t seem to jibe with Church teaching.

When both Col. 1 and Rev. 5 refer to “the saints,” it seems clear they are referring to Christians who are presently “walking[ing] through the valley of the shadow of death” as the Psalmist says. At least, in some sense. But I find many among the non-Catholics I converse with regularly to be surprised when I tell them the Catholic Church acknolwedges that all of the baptized can be referred to as “saints.” CCC 1475 says:

In the communion of saints, “a perennial link of charity exists between the faithful who have already reached their heavenly home, those who are expiating their sins in purgatory and those who are still pilgrims on earth. Between them there is, too, an abundant exchange of all good things.”

In this wonderful exchange, the holiness of one profits others, well beyond the harm that the sin of one could cause others. Thus recourse to the communion of saints lets the contrite sinner be more promptly and efficaciously purified of the punishments for sin.

CCC 946-948 makes it even more clear that all of God’s faithful can be referred to as “saints.”

The Catechism then continues:

Sancta sanctis! (“God’s holy gifts for God’s holy people”) is proclaimed by the celebrant in most Eastern liturgies during the elevation of the holy Gifts before the distribution of communion. The faithful (sancti) are fed by Christ’s holy body and blood (sancta) to grow in communion of the Holy Spirit (koinonia) and to communicate it to the world.

So now the question becomes: “Then why do Catholics refer to canonized ‘saints’ as ‘saints,’ but not one another this side of the veil? This seems to be a contradiction.”

The Clarity of Scripture

I find St. Paul himself to be the best place to go for the answer to this question. In Col. 1:1-2, as I said above, St. Paul definitively refers to all of the faithful at Colossae as “saints.” And I should note here that the Greek word for “saints” (hagioi) is comparable to “sancti” in Latin. It simply means, “sanctified, set apart, or holy.” It means “saints.”

From a Catholic perspective, we would say of course St. Paul would refer to these Christians, and by allusion, all Christians, in this way because “being set apart and made holy” is precisely what baptism accomplishes in the life of every Christian. We “have been baptized into Christ Jesus” (Romans 6:3) who is the source of all holiness.

But here’s the rub.

Giving thanks to the Father, who has qualified us to share in the inheritance of the saints in light.

One More Time With Fred Astaire!