Are the Ashes of “Ash Wednesday” Contrary to Scripture? 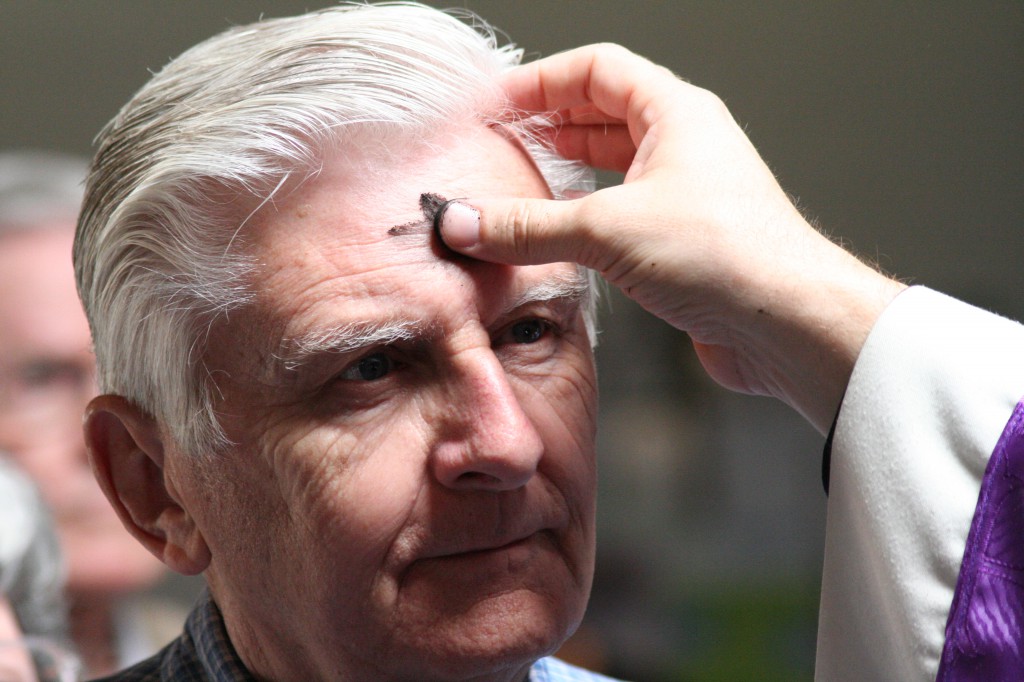 Around every Ash Wednesday I get the “ashes” question from non-Catholics, almost always rooted in Our Lord’s famous words from the Sermon on the Mount:

“And when you fast, do not look dismal, like the hypocrites, for they disfigure their faces that their fasting may be seen by men. Truly, I say to you, they have received their reward. But when you fast, anoint your head and wash your face that your fasting may not be seen by men but by your Father who is in secret; and your Father who sees in secret will reward you” (Matt. 6:16-18).

“Why in the world,” they ask, “would you Catholics directly contradict Jesus’ words by putting ashes on your foreheads on Ash Wednesday?”

The short answer is: Jesus is using hyperbole, a common rabbinical teaching tool in the first century, to accentuate a point: “Don’t fast to be seen by men!” His words were never intended to be taken in a strict, literal sense—no more than when he said, “If anyone comes to me and does not hate his own father and mother and wife and children . . .” (Luke 14:26).

Jesus uses hyperbole a lot in the Sermon on the Mount. (I count thirteen overt examples.) In an earlier article, I pointed out Matthew 7:1 as one of them: “Judge not, lest you be judged.” Jesus’  equally famous saying, “Turn the other cheek” (Matt. 6:39), is another unmistakable example.

For some reason, the “judge not,” “turn the other cheek,” and “fast and pray in secret” passages seem to get the most attention—and abuse, exegetically speaking—not only in the popular culture but among Christian writers and thinkers as well.

I have found the best way to help folks understand the truth here is to begin with a litany of other instances in the Sermon on the Mount where Jesus uses hyperbole. When you establish a context, it helps people understand our Lord’s actual message.

Does anyone really think Jesus wants us to pluck out our eyes and cut off our hands and throw them away? (With our other hand, presumably.) He is using hyperbole to emphasize that we must eliminate all obstacles to serving God. And radically so!

In Matthew 26:63, Jesus himself honored the oath the high priest placed him under: “I adjure thee by the living God, tell us if you are the Christ, the Son of God.” (See Leviticus 5:1.) If Jesus taught oaths to be unlawful or immoral, he would not have responded, or he would have protested and made clear that he did not agree with the concept of oaths.

I have yet to find the commentary that says Jesus wants Christians to loan or give money to everyone who asks them. Nor have I yet found the Christian community that teaches if someone sues a Christian, he would be bound by the word of Christ to capitulate and give the litigant not just what he asked for but even more!

The meaning here is clear: Christians should be known for their benevolence.

Did Jesus really mean that no one should ever know what we give? Then why would Jesus have commended the poor woman who gave the “widow’s mite” in Mark 12:42-43? Or why would the apostles have had a very public display of giving in Acts 5 when Ananias and Saphira were condemned for lying about how much they actually gave? This clearly implies that “left hands” knew what “right hands” were giving!

The truth is: Christ was emphasizing that we should give for love of God and neighbor’s sake, not to be seen of men as a matter of pride.

No, Jesus was emphasizing here that prayer should never be a performance to be seen by men.

If we took these passages not as hyperbole but in a strict, literal, and absolute sense, then we would also have to say Jesus is condemning banks, farming, and making clothes. But we know that this would be a mistake, that the message in this hyperbole is for us to put heavenly cares above temporal ones.

Those who argue that Jesus condemned any signs of public fasting (such as ashes) are making a similar mistake.

We know that Jesus fasted (see Matt. 4:1-2). He had to tell someone about this in order for the apostles to know about it. (It is also recorded in Luke 4.) He didn’t keep it entirely to himself. This was a public fast!

Is this hypocrisy? By no means! Jesus is operating in the mode of the prophet like we see in Isaiah 58:3-6, when Isaiah declares:

“Why have we fasted, and you see it not? Why have we humbled ourselves, and you take no knowledge of it?’ Behold, in the day of your fast you seek your own pleasure, and oppress all your workers. Behold, you fast only to quarrel and to fight and to hit with wicked fist. Fasting like yours this day will not make your voice to be heard on high. Is such the fast that I choose, a day for a man to humble himself? Is it to bow down his head like a rush, and to spread sackcloth and ashes under him? Will you call this a fast, and a day acceptable to the LORD? Is not this the fast that I choose: to loose the bonds of wickedness, to undo the thongs of the yoke, to let the oppressed go free, and to break every yoke?”

Is Isaiah here condemning the notion of fasting with ashes? It may seem so with a surface reading, just as a surface reading of the Sermon on the Mount may seem to condemn the use of ashes as well. But this is obviously not so because God himself would later say through the prophet Jeremiah:

Thus says the LORD . . . O daughter of my people, gird on sackcloth, and roll in ashes; make mourning as for an only son, most bitter lamentation; for suddenly the destroyer will come upon us (Jer. 6:22-26).

Years after Jeremiah’s time, Daniel’s prayers with “fasting . . . sackcloth, and ashes” resulted in God granting him grace and favor:

Then I turned my face to the Lord God, seeking him by prayer and supplications with fasting and sackcloth and ashes. . . . While I was speaking and praying, confessing my sin and the sin of my people Israel, and presenting my supplication before the LORD my God for the holy hill of my God; while I was speaking in prayer, the man Gabriel, whom I had seen in the vision at the first, came to me in swift flight at the time of the evening sacrifice. He came and he said to me, “O Daniel, I have now come out to give you wisdom and understanding. At the beginning of your supplications a word went forth, and I have come to tell it to you, for you are greatly beloved; therefore consider the word and understand the vision” (Dan. 9:3-23).

There is nothing wrong with using a public fast that includes ashes. What is wrong is doing these things simply to be seen by men. That is what Jesus condemns. If you liked this, and would like to learn more, click here.