Did the Catholic Church Remove One of the Ten Commandments? 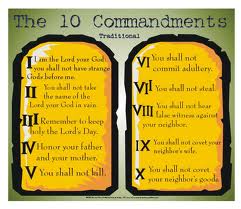 My mother recently sent me an email from a friend who was being challenged by an Evangelical to re-consider her Catholicism. He claimed the Catholic Church had perniciously omitted what he referred to as the second commandment—“You shall not make for yourself a graven image, or any likeness of anything that is in heaven above, or that is in the earth beneath, or that is in the water under the earth” (Exodus 20:4)—in order to keep the Catholic faithful in darkness as to the truth that they should not have statues in their churches. Despite appearances, we know Exodus 20 is not a prohibition against making “any likeness of anything” in a strict sense because we clearly see God either commanding or praising the making of images and statues in multiple biblical texts (see Numbers 21:8-9; I Kings 6:23-28; 9:3). Just five chapters after this so-called prohibition against statues, for example, God commands Moses to make statues representing two angels to be placed over the mercy seat of the Ark of the Covenant:

There are five key points to be made concerning this common misunderstanding among Protestants as well as many quasi-Christian sects.

1. Exodus 20:4 is part of the first commandment that begins in verse 3 and stretches through part of verse five:

Verses 3 and 5 make clear that this commandment is not simply condemning making statues; It is condemning making gods that you bow down to or serve. In a word, this first commandment forbids idolatry, i.e., the adoration of anything or anyone other than God. The Catholic Church condemns this as well.

2. By lifting out part of the first commandment appearing to prohibit the making of “any likeness of anything,” not only do you have God contradicting himself in later commanding the making of statues, but you also end up making the first two commandments repetitive. They are both essentially condemning idolatry.

5. The problem with creating a second “commandment” where there actually is not one really comes to the fore at the bottom of the list. The common Protestant listing of the Ten Commandments combines coveting your neighbor’s wife, the Catholic ninth commandment, with coveting your neighbor’s property, the Catholic tenth commandment. And really it just can’t be any other way because you run out of room. I can’t imagine many women being happy with being equated to property! Some may argue at this point: “Well, that is what the Old Testament teaches. We’re just going with what the inspired author teaches.” Are you really? Let’s take a look. Now, it is true that Exodus 20’s version of the 10 commandments appears to place both women and servants in the place of property.

I say it “appears” to do so because Genesis 1:26-27 does reveal God himself to have said, “Let us make man in our image, after our likeness… So God created man in his own image, in the image of God he created him; male and female he created them.” There is an essential equality between male and female revealed even in the Old Testament, though this revelation is not as clear and unambiguous as what we have in the New Testament. Exodus 20 certainly does anything but add to the clarity of the point. When I say the revelation of this essential equality is not as clear in the Old Testament, we need to understand why this is so. The Old Testament consists of 46 books written over a period of ca. 1500 years, representing a progressive revelation. Hebrews 1:1-2 says, “In many and various ways God spoke of old to our fathers by the prophets.” The Greek word for “many ways” is polumeros, which means “in many portions;” God gave his revelation in piecemeal fashion over the centuries, taking an ancient people right where they were and gradually beginning to reveal more and more truth as they were able to receive it and as he gradually gave them more and more grace to be able to receive it, all the while respecting their freedom. “But when the time had fully come, God sent forth his Son…” (Galatians 4:4) to communicate the fullness of the revelation God willed for his people. For example, the divorce God permitted in Deut. 24:1-4, he later says “[he] hates” in Malachi 2:16. And when Jesus elevated marriage to the level of sacrament eliminating divorce and remarriage absolutely in Matt. 19:5-6, he explained that this allowance by God through Moses was never intended from the very beginning citing Genesis 2:24, “the two shall become one flesh.” God permitted things early that he would not have ever willed in an antecedent sense as he helped his people to grow much like a parent does not treat a four year-old the same as he would treat a fourteen year-old. In a similar way, though God revealed the essential equality of man and woman very early in salvation history (Gen. 1:26-27), this revelation was given by God to an ancient people who did not have the same understanding of the essential equality of man and woman we so often take for granted given the fullness of revelation we have enjoyed in the New Covenant for 2,000 years. God did not expect his people to change immediately, nor did he give them the fullness of the revelation that we have in Christ all at once; rather, he helped them along as we’ve said. In fact, we can see this development of understanding even in the Old Testament itself. We cited the earlier version of the Ten Commandments in Exodus 20, but notice the change by the time God gave his people Deuteronomy:

The inspired author of Deuteronomy now makes the distinction between wife and property sharper by using two different Hebrew words for “covet” and “desire” and by only using the word “covet” with regard to the wife. The two separate commandments now become undeniable. We’ll leave the discussion of the status of the servants for another blog post!

Catholic, Are You Born Again?