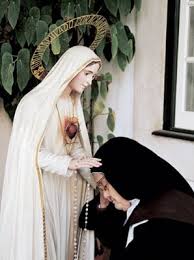 Well-meaning Evangelicals and Fundamentalists, armed with the above text, often try to use it against Catholics: “How can God make it any clearer than this? We are not to have ‘graven images,’ or statues, yet what do you see in almost every Catholic Church around the world? Statues! This is the definition of idolatry. And please, do not give me any of this nonsense about equating the statues in your churches to carrying a photograph of a loved one in your wallet. In Exodus 20, as well as in Deuteronomy 5:7–8, God specifically says we are not to make statues in the shape of anything in the sky above, the earth below or the waters beneath the earth.”

How are we to respond?

The Catholic Church does not believe any statue or image has any power in and of itself. The beauty of statues and icons move us to the contemplation of the Word of God as he is himself or as he works in his saints. And, according to Scripture, as well as the testimony of the centuries, God even uses them at times to impart blessings (e.g., healings) according to his providential plan.

The Lord did not prohibit statues; he prohibited the adoration of them. If God truly meant that we were not to possess any statues at all, then he would later contradict himself. Just five chapters after this commandment in Exodus 20, God commanded Moses to build the ark of the Covenant, which would contain the presence of God and was to be venerated as the holiest place in all of Israel. Here is what God commanded Moses concerning the statues on it:

In Numbers 21:8–9, not only did our Lord order Moses to make another statue in the form of a bronze serpent, he commanded the children of Israel to look to it in order to be healed. The context of the passage is one where Israel had rebelled against God, and a plague of deadly snakes was sent as a just punishment. This statue of a snake had no power of itself—we know from John 3:14 it was merely a type of Christ—but God used this image of a snake as an instrument to effect healing in his people.

Further, in 1 Kings 6, Solomon built a temple for the glory of God, described as follows:

In the inner sanctuary he made two cherubim of olivewood, each ten cubits high. . . . He put the cherubim in the innermost part of the house. . . . He carved all the walls of the house round about with carved figures of cherubim and palm trees, and open flowers, in the inner and outer rooms. . . . For the entrance to the inner sanctuary he made doors of olivewood. . . . He covered the two doors of olivewood with carvings of cherubim, palm trees, and open flowers; he overlaid them with gold (1 Kgs. 6:23, 27, 29, 31, 32).

King Solomon ordered the construction of multiple images of things both “in heaven above” (angels) and “in the earth beneath” (palm trees and open flowers). After the completion of the temple, God declared he was pleased with its construction (1 Kgs. 9:3).

It becomes apparent, given the above evidence, that a strictly literal interpretation of Exodus 20:2–5 is erroneous. Otherwise, we would have to conclude that God prohibits something in Exodus 20 that he commands elsewhere.

Why would God use these images of serpents, angels, palm trees, and open flowers? Why didn’t he heal the people directly rather than use a “graven image”? Why didn’t he command Moses and Solomon to build an ark and a temple void of any images at all?

First, God knows what his own commandments mean. He never condemned the use of statues absolutely. Second, God created man as a being who is essentially spiritual and physical. In order to draw us to himself, God uses both spiritual and physical means. He will use statues, the temple, or even creation itself to guide us to our heavenly home.

Psalm 19:1 tells us: “The heavens are telling the glory of God; and the firmament proclaims his handiwork.” Romans 1:20 says: “Ever since the creation of the world his invisible nature, namely, his eternal power and deity, has been clearly perceived in the things that have been made.” Gazing at a sunset—or a great painting of a sunset—and contemplating the greatness of God through the beauty of his creation is not idolatry. Nor is it idolatrous to look at statues of great saints of old and honor them for the great things God has done through them. It is no more idolatrous for us to desire to imitate their holy lives and honor them than it was for Paul to exhort the Corinthians to imitate his own holy life (1 Cor. 4:16) and to “esteem very highly” those who were “over [the Thessalonians] in the Lord and admonish [them]” (1 Thess. 5:12–13).

Jesus Is the Reason

It is Jesus Christ himself who gives us the ultimate example of the value of statues and icons. Indeed, Christ, in his humanity, has opened up an entirely new economy of iconography and statuary. Christ becomes for us the ultimate reason for all representations of the angels and saints. Why do we say this? Colossians 1:15 tells us Christ is, “The image (Gr.-icon) of the invisible God.” Christ is the ultimate icon! And what does this icon reveal to us? He reveals God the Father. When Jesus said, “He who has seen me has seen the Father,” in John 14:9, he does not mean that he is the Father. He isn’t. He’s the Son. Hebrews 1:3 tells us Christ “reflects the glory of God and bears the very stamp of his nature.” That is the essence of what statues and icons are. Just as “the word became flesh” (John 1:14) and revealed the Father to us in a manner beyond the imaginings of men before the advent of Christ, representations of God’s holy angels and saints are also icons of Christ who by their heroic virtue “reflect the glory of God” as well. Just as St. Paul told the Corinthians to hold up his own life as a paradigm when he said, “I urge you, then, be imitators of me,” the Church continues to hold up great men and women of faith as “icons” of the life of Christ lived in fallen human nature aided by grace.

Adoration is as Adoration Does

Many Protestants will claim that, while the Catholic may say he does not adore statues, his actions prove otherwise. Catholics kiss statues, bow down before them, and pray in front of them. According to these same Protestants, that represents the adoration that is due God alone. Peter, when Cornelius bowed down to adore him, ordered him to “stand up; I too am a man” (Acts 10:26). When John bowed down before an angel, the angel told him, “You must not do that! I am a fellow servant with you” (Rev. 19:10). But Catholics have no problem bowing down before what is less—a statue of Peter or John!

Is kissing or kneeling down before a statue the same as adoring it? Not necessarily. Both Peter in Acts 10 and the angel in Revelation 19 rebuked Cornelius and John, respectively, specifically for adoring them as if each was adoring the Lord. The problem was not with the bowing; it was with the adoration. Bowing does not necessarily entail adoration. For example, Jacob bowed to the ground on his knees seven times to his elder brother Esau (Gen. 33:3), Bathsheba bowed to her husband David (1 Kgs. 1:16), and Solomon bowed to his mother Bathsheba (1 Kgs. 2:19). In fact, in Revelation 3:9, John records the words of Jesus:

Here, John uses the same verb for “bow down” (proskuneo) that he used in Revelation 19:10 for “adoration” when he acknowledged his own error in adoring the angel. Would anyone dare say that Jesus would make someone commit idolatry?

Catholics take very seriously the biblical injunctions to praise and honor great members of God’s family (see, for example, Ps. 45:17; Luke 1:48; 1 Thess. 5:12–13; 1 Tim. 5:17; 1 Pet. 5:5–6). We also believe, as Scripture makes very clear, that death does not separate us from the love of Christ (Rom. 8:38) and from his body, which is the Church (Col. 1:24). Our “elders in heaven” (cf. Rev. 5:8) should be honored as much or even more than our greatest members on earth. So having statues honoring God or great saints brings to mind the God we adore and the saints we love and respect. For Catholics, having statues is just as natural as—you guessed it—having pictures in our wallets to remind us of the ones we love here on earth. But reminding ourselves of loved ones is a far cry from idolatry.