Donald Trump Was Right… Then Wrong! 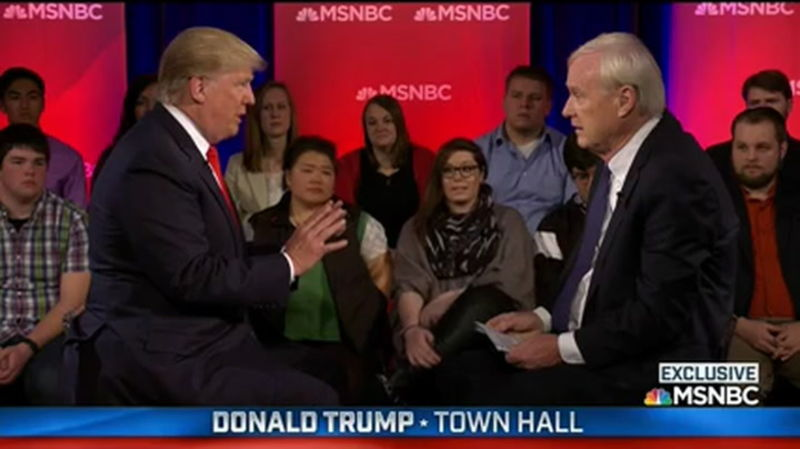 You can get the entire transcript of the now-famous interview here, but Chris Matthew’s town hall meeting interviewing Donald Trump and then taking questions from the audience included a fascinating exchange on the topic of abortion. Now that “The Donald” is on record as changing from pro-death to pro-life, his position on abortion has become fresh meat for attackers from the left (and now from the right as well as we will see). The question did not focus on Trump being pro-life; rather, it focused on a hypothetical. The gist of it was: “If Roe v. Wade were to be overturned, and if abortion were to be outlawed, would you, Donald Trump, support punishing a woman who would break the law and have an abortion anyway?” Here is part of the actual exchange:

MATTHEWS: Do you believe in punishment for abortion, yes or no as a principle?

TRUMP: The answer is that there has to be some form of punishment.

MATTHEWS: For the woman.

TRUMP: Yeah, there has to be some form.

From that little exchange (and more during the conversation), all Hell broke loose on Donald Trump. And not just from the left, mind you, but from the right as well. Pro-lifers as well as, predictably, the pro-death camp, lambasted Donald Trump as an absolute buffoon for holding this position. “How dare you say a woman should be punished for having an abortion!” Rachel Maddow of MSNBC claimed Trump said “women should be jailed” for having an abortion, which, of course he did not say. And there have been many on the right and the left make similar and ill-informed accusations. Mr. Trump actually said the kind of punishment was impossible for him to lay out because of the complex nature of the question. And he was right there as well.

But the backlash was so intense and so immediate that Donald Trump back-peddled and changed his position saying, in effect, only the abortionist should be punished, not the woman having as abortion.

And, unfortunately, Ted Cruz was quick to jump on the bandwagon and condemn the notion that a woman should even be considered to be punished… for murdering her child.

Why Donald Trump God It Right the First Time Around

Now, don’t get me wrong here. I am not defending Donald Trump here. I am not excusing or denying the fact that Trump was obviously ill-prepared for this question and he said a number of things that were reminiscent of a Monty Python skit they were so bad. For example, when asked whether or not he would ban abortion and then what that means… well… read it for yourself:

Why I Have Decided to Leave the ...