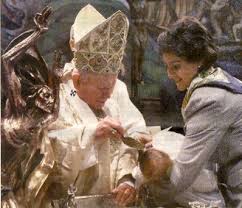 The Catechism of the Catholic Church gives us the most important reasons why we must baptize infants:

Born with a fallen human nature and tainted by original sin, children also have need of the new birth in Baptism to be freed from the power of darkness and brought into the realm of the freedom of the children of God, to which all men are called. The sheer gratuitousness of the grace of salvation is particularly manifest in infant baptism. The Church and the parents would deny a child the priceless grace of becoming a child of God were they not to confer Baptism shortly after birth (CCC 1250).

Original sin is a reality from which each and every human person desperately needs to be freed. Biblically speaking, Romans 5:12 is remarkably clear on this point:

Therefore as sin came into the world through one man and death through sin, and so death spread to all men because all men sinned.

Even if nothing else was said in Scripture implying infant baptism, we could conclude it to be necessary just from this simple fact: babies need to have original sin removed from their souls.

But there is more.

Catholics Are So Jewish

St. Paul, being a Jew, as well as all of the apostles, understood the idea that true religion is a family affair. A Jew became a Jew when he was circumcised on the eighth day. They did not have to first “accept Moses as their personal prophet” before they could be circumcised. And according to St. Paul, baptism is the fulfillment of circumcision:

In him also you were circumcised with a circumcision made without hands, by putting off the body of flesh in the circumcision of Christ; …you were buried with him in Baptism” (Colossians 2:11-12).

The RSV, which I quoted above has the word “and” placed between “Christ” and “you were buried…” I left it out because it is not in the original Greek text. The Greek indicates that baptism is the circumcision of Christ!

This seems trivial to us today. Okay, so Baptism is the “circumcision of Christ.” But this was not trivial to first-century Jewish Christians who were being challenged to circumcise their children “after the manner of Moses or else they could not be saved” (cf. Acts 15:1-2). Many were being persecuted because they chose to baptize their children instead of circumcising them. As St. Paul says in Romans 2:28:

What is this “spiritual circumcision” of which St. Paul speaks? Baptism, according to Colossians 2:11-12. Not the shedding of foreskin, but the transformation of the inward man through the sacrament. As a fulfillment of that which is only a type, baptism does something circumcision could never do: “baptism now saves [us]” (I Peter 3:21). The change that occurs is not physical; it is spiritual. As it is often said, what you don’t see is what you get in all of the sacraments, baptism included.

Elsewhere in Scripture we find a close association between baptism and circumcision. In Galatians 3:27-28, St. Paul says:

St. Paul’s point is that baptism is more inclusive than its Old Testament antecedent. You had to be a free, male, Jew to be circumcised (at least, on your own volition). And when were males generally circumcised in the Old Testament, by the way? At eight days of age (Gen. 17:12). St. Paul’s point is that in the New Testament baptism is open to all. Of course, babies would be included.

The Implications of Circumcision

This idea of baptism as the circumcision of Christ and therefore open to infants is found at least implied in other biblical texts as well. You’ll recall that on Pentecost, Peter preached to thousands of Jews, who already had an understanding of their faith involving a family covenant, and said, “Repent, and be baptized every one of you in the name of Jesus Christ for the forgiveness of your sins… For the promise is to you and to your children and to all that are far off, every one whom the Lord calls to him” (Acts 2:38-39, emphasis added).

If Peter believed baptism was exclusive to adults, he was a terrible teacher!

Catholics Are So… New Testament

Now they were bringing even infants to him that he might touch them; and when the disciples saw it, they rebuked them. But Jesus called them to him, saying, “Let the children come to me, and do not hinder them; for to such belongs the kingdom of God. Truly, I say to you, whoever does not receive the kingdom of God like a child shall not enter it.”

These were not just children who were being brought to Jesus, the Greek word here is “brephe,” which mean infants. And again, the Jews listening would understand that the parents’s belief and obedience suffices for the child until he is old enough to own his own faith. The parents bringing children to Christ, according to Christ, is equivalent to the children coming to him on their own. Moreover, because babies are icons of what we all should be, i.e., they put up no obstacles to the work of God in their lives, and they can most obviously do absolutely nothing to merit anything from God, they are reminders of “the sheer gratuitousness of the grace of salvation” as CCC 1250 says.

From the very beginning whole “households” received baptism. There is no reason to believe infants would not have been included (cf. Acts 11:14; 16:15, 33; 18:8; I Cor. 1:16), especially considering what we’ve already seen. For brevity’s sake, I will use just one of the five examples cited in the above parenthesis while I’ll encourage all reading this to take a look at the other four examples as well.

When St. Paul led the Philippian jailer to Christ in Acts 16, he said to him, “Believe in the Lord Jesus, and you will be saved, you and your household” (Acts 16:31, emphasis added). He does not say that all in his household must first believe. He simply says they will all be saved. How could he say that? St. Paul seems to have understood what St. Peter had already preached back when Paul was still persecuting Christians (in Acts 2:38). The promise of faith and baptism is for the jailer and his children.

Jesus said, “He that believes and is baptized shall be saved,” in Mark 16:16. Many claim this to mean faith must precede baptism. And this would seem to exclude infants as possible candidates for baptism. Seems airtight. Can an infant possess faith? No. Therefore, a baby could not be licitly baptized.

While this argument may sound convincing on the surface, it does not survive serious scrutiny. First, Jesus did not say faith must precede baptism for an individual. He simply said one has to believe and be baptized in order to be saved. He said nothing about the two having to be accomplished in that order for the individual.

Moreover, even if we were to accept as fact that faith must come first, even though Mark 16:16 does not say that, this would not exclude the possibility that the faith of the parents could not suffice until the child reaches the age of accounatability.

Second, a strict reading of Mark 16:16 has devastating consequences. A baby cannot believe. Does that mean all babies who die without believing will not be saved? Of course not! The thief on the cross was presumably not baptized. Does that mean he would not go to heaven? Of course not! Belief and baptism are necessary to those who have the opportunity to do so. If they were to be impeded from being able to believe or be baptized, and that could be the case for many different reasons, God would judge them in accordance with what they were responsible for.

This last point gets to another reason why it is so important to baptize babies. Sometimes we are accountable not just for ourselves, but for others as well (see Ez. 3:18-19). Parents are responsible to baptize their babies. If they knowingly do not do so, they break God’s covenant in a very serious matter. Like the paralytic in Matt. 9:2-6 who was completely dependent upon others to bring him to Christ in order for him to get his sins forgiven (and his physical healing), a baby is completely dependent upon his parents to bring him to Christ.

And notice as well that it was the faith of those who brought the paralytic to Christ that God used instrumentally for the salvation of the paralytic: “… when Jesus saw their faith, he said to the paralytic, ‘Take heart, my son; your sins are forgiven’” (Matt. 9:2). Whose faith did Jesus “see” here? “Their” seems to refer back to the “they” of the same verse: “And behold, they brought to him a paralytic…”

The faith of the parent suffices when they bring their infants to be blessed by Christ via “the circumcision of Christ.”

St. Paul clearly teaches that circumcision never justified anyone, at least, in the sense of the initial gift of justification. “We say that faith was reckoned to Abraham… before he was circumcised” (Romans 4:9-10). So doesn’t this prove baptism does not save us either?

1. As I said above, baptism is the fulfillment of that which was only a type in the Old Testament. The fulfillment is always more glorious than the type. Thus, “baptism does now save you” (I Peter 3:21) in a way that circumcision could not.

2. It is true Abraham and David were St. Paul’s two examples of justifying grace occurring apart from circumcision in Romans 4. And yet, Abraham instituted circumcision by divine mandate and David was, in fact, circumcised as a little baby. Indeed, God also declared in the Old Testament that “Any uncircumcised male who is not circumcised in the flesh of his foreskin shall be cut off from his people; he has broken my covenant” (Gen. 17:14).” It is not a contradiction to say both faith and circumcision were necessary to remain within God’s covenant in the Old Testament, even though circumcision played no role in initial justification.

Were Joseph and Mary Married at the ...

Justification According to Scripture