Is the Assumption of Mary Historical? 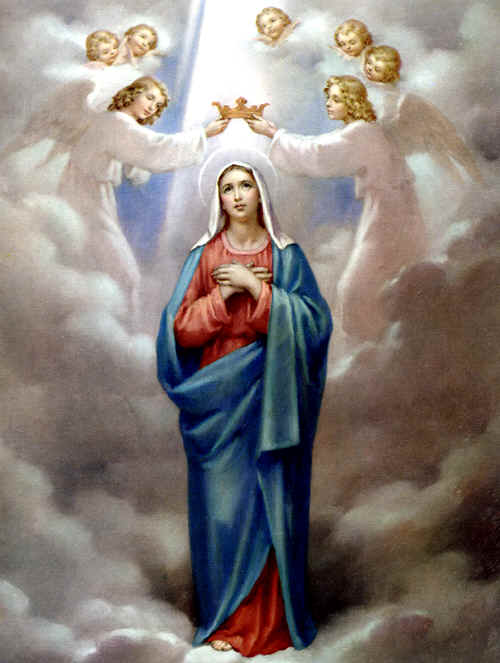 In summary, the doctrine of the Assumption of Mary began with an historical event that is alluded to in Scripture and has been believed in the Church for 2,000 years. It was passed down in the Oral Tradition of the Church and developed over the centuries, but it was always believed by the Catholic faithful. Let us examine the facts:

1. Archaeology reveals two tombs of Mary that still exist today, one in Jerusalem and one in Ephesus. The two tombs are explained by the fact that Mary had lived in both places. But what is inexplicable apart from the Assumption of Mary is the fact that there is no body in either tomb. And there are no relics. Anyone who would peruse early Church history knows that Christian belief in the communion of saints and the sanctity of the body—in radical contrast to the Gnostic disdain for “the flesh”—led early Christians to seek out with the greatest fervor relics from the bodies of great saints. Cities, and later, religious orders, would fight over the bones of great saints. This is one reason why we have relics of the apostles and so many of the greatest saints and martyrs in history. Yet, never was there a single relic of Mary’s body? As revered as Mary was, this would be very strange, except for the fact of the assumption of her body.

2.On the historical front, Fr. Michael O’Carroll, in his book, Theotokos – A Theological Encyclopedia of the Blessed Virgin Mary, pg. 59, says:

We have known for some time that there were wide-spread “Transitus Stories” that date from the sixth century that teach Mary’s glorious Assumption. It was the promulgation of the dogma of the Assumption by Pope Pius XII that re-kindled interest in these stories of the end of Mary’s life. In 1955, Fr. A.A. Wenger published L’Assomption.

Indeed, and Fr. Wenger found a Greek manuscript that verified what scholars had previously believed to be true. Because there were whole families of manuscripts from different areas of the world in the sixth century that told a similar story of Mary’s Assumption, there had to be previous manuscripts from which everyone received their data. Fr. Wenger discovered one of these earlier manuscripts, believed to be the source later used by John of Thessalonica in the sixth century in his teaching on the Assumption. Fr. O’Carroll continues:

Some years later, M. Haibach-Reinisch added to the dossier an early version of Pseudo-Melito, the most influential text in use in the Latin Church. This could now, it was clear, be dated earlier than the sixth century…V. Arras claimed to have found an Ethiopian version of it which he published in 1973; its similarity to the Irish text gave the latter new status. In the same year M. Van Esbroeck brought out a Gregorian version, which he had located in Tiflis, and another, a Pseudo-Basil, in the following year, found in Mount Athos.

Much still remains to be explored. The Syriac fragments have increased importance, being put as far back as the third century by one commentator. The whole story will eventually be placed earlier, probably in the second century.

Basically, the first appearance of the idea of the Bodily Assumption of Mary is found in a source that was condemned by the then-bishop of Rome, Gelasius I! The irony is striking: what was defined by the bishop of Rome as heresy at the end of the fifth century becomes dogma itself in the middle of the twentieth!

1. Even if it were a Papal document, Decretum Gelasianum would not be a “definition” by the bishop of Rome declaring the Assumption of Mary to be heresy, as White claims. The document does not make such an assertion. It gives us a rather long list of titles of apocryphal books after having listed the accepted books of the Bible. That’s all. One of these titles declared to be “apocryphal” is referred to as: “Liber qui appellatur Transitus, id est Assumptio sanctae Mariae,” which translates as “A book which is called, ‘Having been taken up, that is, the Assumption of Holy Mary.’” White evidently thought this document condemns as untrue the doctrine of the Assumption of Mary. But it did not. As a matter of history, this document does not condemn any doctrines in the books it lists at all; it declares the books themselves to be apocryphal and therefore not part of the canon of Scripture.

This would be something akin to the Church’s rejection of The Assumption of Moses and The Book of Enoch as apocryphal works. The fact that these works are apocryphal does not preclude St. Jude (9; 14) from quoting both of them in Sacred Scripture. Because a work is declared apocryphal or even condemned does not mean that there is no truth at all to be found in it.

2.There is real question among scholars today as to whether what is popularly called the Dectretum Gelasianum was actually written by Pope Gelasius. According to The Oxford Dictionary of the Christian Faith, p. 462, it was probably written in the sixth century (Pope Gelasius died in the late fifth century) in Italy or Gaul and was most likely not a Papal work at all. In fact, it was falsely attributed to several different Popes over the years.

3. If the teaching of the Assumption had genuinely been condemned by the Pope, great saints and defenders of orthodoxy like St. Gregory and later St. John Damascene would not have taught it. Further, we would have found other writers condemning this teaching as it became more and more popular throughout the world. And we certainly would not see the Assumption celebrated in the Liturgy as we do as early as the fifth century in Palestine, Gaul in the sixth, universally in the East in the seventh century, and in the West in the eighth century. Far from a condemnation of the Assumption, this reveals just how widespread this teaching truly was.

Why Don’t the Earliest Fathers Write About the Assumption?

The most obvious reason would be that when Gnostics, who were some of the main enemies of the Faith in the early centuries of the Christian era, agreed with the Church on the matter, there would have been no need to defend the teaching. In other words, there is no record of anyone disagreeing on the matter. We don’t find works from the earliest Fathers on Jesus’ celibacy either, but that too was most likely due to the universal agreement on the topic. Much of early Christian literature was apologetic in nature. Just like the New Testament, it mostly dealt with problem areas in the Church that needed to be addressed.

Even so, it is not as though there is no written evidence to support the Assumption either. According to Fr. O’Carroll (Theotokos, 388), we now have what some believe to be a fourth-century homily on the prophet Simeon and the Blessed Virgin Mary by Timothy, a priest of Jerusalem, which asserts Mary is “immortal to the present time through him who had his abode in her and who assumed and raised her above the higher regions.” Evidently, there was disagreement in the circulating stories of the Assumption of Mary as to whether she was taken up alive or after having died. But whether or not she was assumed was not in question. Indeed, the Church even to this day has not decided the matter of whether Mary died or not definitively, though she does teach Mary to have died at the level of the Ordinary Magisterium, for example, in Pope Pius XII’s Munificentissimus Deus, 17, 20, 21, 29, 35, 39, and 40.

I believe St. Epiphanius’ work needs to be re-examined when it comes to the Assumption of Mary. This great bishop and defender of orthodoxy may give us key insights into the antiquity of the Assumption, writing in ca. AD 350. In his classic Panarion (“bread box”) or Refutation of All Heresies, he includes eighty-eight sections dealing with scores of the most dangerous heresies of his day. But in sections 78 and 79, he deals with one particular sect comprised mainly of women called the “Collyridians.” Evidently, this sect was “ordaining” women as “priestesses” and adoring Mary as a goddess by offering sacrifice to her. St. Epiphanius condemns this in the strongest of terms:

For I have heard in turn that others who are out of their minds on this subject of this holy Ever-virgin, have done their best and are doing their best, in the grip both of madness and of folly, to substitute her for God. For they say that certain Thracian women there in Arabia have introduced this nonsense, and that they bake a loaf in the name of the Ever-virgin, gather together, and attempt an excess and undertake a forbidden, blasphemous act in the holy Virgin’s name, and offer sacrifice in her name with women officiants.

This is entirely impious, unlawful, and different from the Holy Spirit’s message, and is thus pure devil’s work . . .

And nowhere was a woman a priest. But I shall go to the New Testament. If it were ordained by God that women should be priests or have any canonical function in the Church, Mary herself, if anyone, should have functioned as a priest in the New Testament. She was counted worthy to bear the king of all in her own womb, the heavenly God, the Son of God. Her womb became a temple, and by God’s kindness and an awesome mystery, was prepared to be a dwelling place of the Lord’s human nature. But it was not God’s pleasure that she be a priest.

These women who were adoring Mary as if she were a goddess would no doubt have been well acquainted with the “Transitus Stories” and would have been teaching Mary’s Assumption. In fact, it appears they were teaching Mary never died at all. This would be in keeping with John of Thessalonica, Timothy of Jerusalem, and others who taught this among Christians. However, these women were taking Mary and the Assumption to the extreme by worshipping her. What is interesting here is that in the midst of condemning the Collyridians, St. Epiphanius gives us, in section 79 of Panarion,a point-blank statement that is very-much overlooked today by many:

Like the bodies of the saints, however, she has been held in honor for her character and understanding. And if I should say anything more in her praise, she is like Elijah, who was virgin from his mother’s womb, always remained so, and was taken up, but has not seen death.

St. Epiphanius clearly indicates his personal agreement with the idea that Mary was assumed into heaven without ever having died. He will elsewhere clarify the fact that he is not certain, and no one is, at least not definitively so, about whether or not she died. But he never says the same about the Assumption itself. That did not seem to be in doubt. By comparing her to Elijah he indicates that she was taken up bodily just as the Church continues to teach 1,600 years later.

Since the time of the promulgation of the dogma of the Assumption of Mary, there has been much new discovery. We now have written evidence of the Assumption of Mary as far back as the third century. Though it is not necessary for there to be written evidence all the way back to the second-century for us as Catholics because we have Sacred Tradition and Sacred Scripture as interpreted by the Magisterium of the Church first and foremost that has already given us the truth of the Matter, I believe it is really exciting that new historical discoveries continue to be made and once again… and again… and again, they confirm the Faith of our Fathers.

Evangelism in 2016 And Beyond