Is the New Covenant Church Hierarchical? 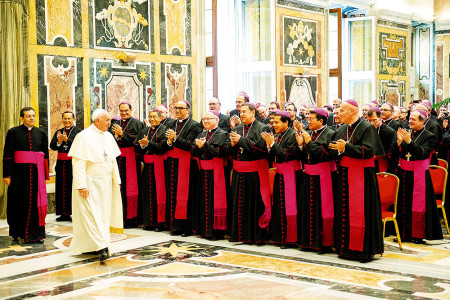 I’ve been gone for quite a while due to the fact that we’ve overhauled the website. We’ve also created a new thing here at TimStaples.com called the “Apostolic Insider.”  This is a very special opportunity for those who want to dive in. There will be lots of goodies involved, inside info, and more. So check it out.

At any rate, on to my first post in almost six months. I’ve been itchin’ to get back at it!

I would say about once per month or so I get a question like I did not long ago that says something akin to this:

“Matthew 20:20-28 condemns the human tradition of hierarchy. There is no hierarchy in the Church according to Jesus. Jesus is the hierarchy!”

First, let’s take a gander at the text itself:

Then the mother of the sons of Zebedee came up to [Jesus], with her sons, and kneeling before him she asked him for something… “Command that these two sons of mine may sit, one at your right hand and one at your left, in your kingdom.” But Jesus answered… “You know that the rulers of the Gentiles lord it over them, and their great men exercise authority over them. It shall not be so among you; but whoever would be great among you must be your servant… even as the Son of man came not to be served but to serve…”

This text doesn’t condemn hierarchy. It teaches that the hierarchy who “are over [us] in the Lord and admonish [us]” (I Thess. 5:12, cf. Heb. 13:17) ought to govern in the image of Christ, who washed the feet of the apostles. Jesus also said to the apostles:

As my Father appointed a kingdom for me, so do I appoint a kingdom for you that you may eat and drink at my table in my kingdom, and sit on thrones judging the twelve tribes of Israel (Luke 22:29-30).

Jesus is “the King of kings and Lord of lords” (Rev. 19:16) in a kingdom. And he clearly established a hierarchy in the kingdom as Ephesians 4:11 indicates: “And [Christ’s] gifts were that some should be called apostles, some prophets, some evangelists, some pastors and teachers…” The Church is called “the Kingdom of Heaven/God” scores of times (see Matt. 13, etc.) in Scripture whose hierarchy is endowed with the authority of Christ to speak for him (see Matt. 10:40, 18:15-18). That’s hierarchy!