“Little Boy:” A Movie You Must See! 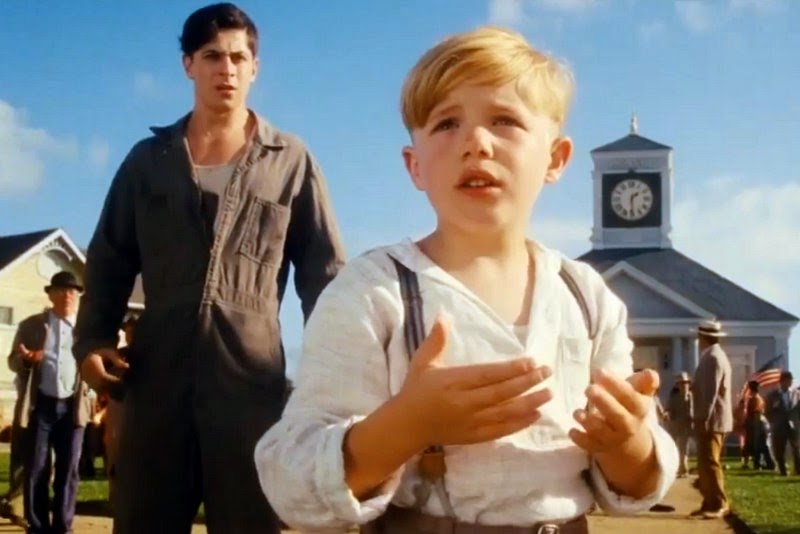 And I say this not just because I am in the movie. But yes, I am in the movie. Don’t blink, though, or you might miss me. I have two speaking lines (I play a soldier in a hospital to visit wounded comrades). I say this because it is a magnificent movie. It opens April 24th in theatres across the country.

“Little Boy” comes to us from Metanoia Films, the same people who gave us “Bella” back in 2006. Their very first film project, it, and they, took Hollywood by surprise by winning the Toronto Film Festival. There could have been no better title for what was a truly “beautiful” movie.

“Little Boy,” the movie, is named after its central character, Pepper Busby, played by Jakob Salvanti, an eight year-old “little boy” who appears to suffer from dwarfism. At least, he seems to have stopped growing resulting in him being much smaller than children his age. As a result, he becomes the object of relentless derision by the youth of “O’Hare, California,” a fictional beach town in California beautifully created with a Norman Rockwell feel that has the effect of really transporting you back to a time long gone in American history.

Pepper’s only real friend, in his mind, is his father, James Busby, played by Michael Rapaport. But when Pearl Harbor happens, and his father gets drafted and goes to war, Pepper’s world comes undone.

Pepper is determined he is going to end the war and bring his father home safely no matter the cost. And hearing a sermon at Mass based on Christ’s promise in Matt. 17:20: “… if you have faith as a grain of mustard seed, you will say to this mountain, `Move from here to there,’ and it will move; and nothing will be impossible to you,” gives “little boy” the inspiration as to just how he will bring his father home. He will simply believe!

Through the wisdom of an elderly priest-sage, Fr. Oliver, played brilliantly by Tom Wilkinson, Pepper quickly discovers that “faith alone” is not enough. He needs a faith that “works by love” if he wants to be able to move mountains. For example, says the wise priest, he must perform the corporal works of mercy, and love his enemies as Jesus Christ taught, if he is going to have a living and power-filled faith.

In a nutshell, “Little Boy” is a masterfully crafted tale of how Pepper Busby, “Little Boy,” sets out with all the wrong motives (at least, at the outset) to accomplish a litany of good deeds in order to fulfill what sees as necessary to get his father home, and in the process, his life is changed, the lives of each of his family members are changed, the town of “O’Hare, California” is changed; and in the end, “Little Boy” changes the world!

You watch the movie, and you tell me!

And by the way, this is not a movie you’ll watch just once. There are so many stories beneath the story, you will want to watch it again, and again. And each time, you will discover something more. This is a beautiful movie about faith, family, friendship, life, death, and ultimately, resurrection!

Apart from this just being a really good movie, here are a few added incentives for you to check it out, and preferably on opening weekend! As an independent film, we really do need folks to go to the theatres on the opening weekend because large numbers in the theatres will translate into more theatres getting the movie across the country in the following weeks.

1. Kevin James plays the part of Pepper’s doctor, “Dr. Fox.” This is Kevin’s first serious role. He will surprise you! Just as you’re instinctively waiting for a punch line from Kevin (that never comes!), you realize, “Hey, this Kevin James guy is actually a good and versatile actor!”

2. Emily Watson is absolutely brilliant as “Emma Busby,” Pepper’s mom. If she doesn’t bring you to tears, you need to check to see if your heart is still beating. I’ll leave it at that.

3. David Henrie, one of the young stars of “The Wizards of Waverly Place,” who plays Pepper’s older brother, London, is amazing. You will wonder if this is the same guy you saw on the Disney Channel. To say he has come of age as an actor is an understatement.

4. It is worth the price of admission just to see the Mexican heartthrob, Eduardo Verastagui, play a priest, Fr. Crispin. Picture this: the man who was once voted one of “the sexiest men alive” plays a rather quirky, stammering, and insecure priest with a balding head and coke-bottle glasses. Priceless!

5. Cary Tagawa is wonderful as the unjustly hated “Jap,” “Hashimoto.” As an atheist, his relationship with Pepper is wonderful to watch. He’s not buying into the “God thing,” but in the end you wonder. The questions raised here are left to you to answer. And that is exactly as it should be.

6. Last, but certainly not least, Jacob Salvanti, “Pepper Busby,” steals the show. Having been with him on the set in the scene we were in together, I must say, at times, I could not believe I was working with about an eight year-old child (he might have been seven back then, as I recall). When he was playing around with Cary Tagawa and I between shots, we saw a well-rounded, fun, and, at times, slightly mischievous and all-too-normal child. But when the camera turned on, this kid was transformed into “Pepper Busby,” and a remarkably disciplined actor, I might add, right before our very eyes!