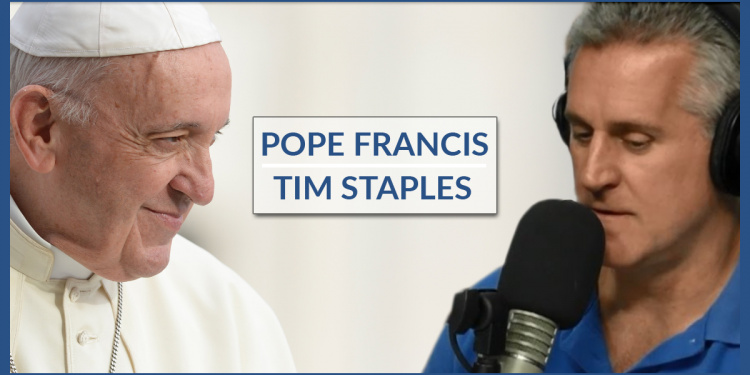 Recently, I received an email from a constituent informing me that some Catholic blogger was claiming that “Pope Francis and Tim Staples support civil unions for homosexuals.” I did not bother to listen to the blogger because I knew this untruth would be coming from the usual suspects. And it did. But for clarity’s sake, I do want to make clear to you what I made clear to this constituent. It actually doesn’t matter what I think. The Catholic Church condemns civil unions for homosexuals that mimic marriage. The Church can never support an intrinsic evil (CCC 2357). That is the infallible teaching of the Church. Pope Francis has made it very clear that if there were to ever be “civil unions” of any sort, they could not be anything that even remotely resembles or is even analogous to marriage. I believe the language of “unions” should not be used as a matter of prudence because it causes confusion. But I am not the pope.

Let me use an example of what I mean by “I believe the language of ‘unions’ should not be used.” I was against the magisterial use of the phrase “homosexual persons,” but Pope St. John Paul II chose to use that language (CCC 2358-2359), and the Church continues to use that language magisterially. Therefore, I defend it and explain to people that the Church simply means people with same sex attraction are persons. That’s it. They are referred to as “homosexuals,” unfortunately, but because of that they do not cease to be persons with the rights of a person. By that the Church does not mean “they were born that way,” or that homosexual acts are morally licit, or any of the other things some want it to mean, or what some others claim it means. These people are gravely mistaken.

In the same way, Pope Francis has presented the possibility for legal arrangements of some sort between homosexuals much like any two human persons are free to make legal arrangements concerning property rights, financial arrangements, etc. in a manner consonant with the language used by Pope St. John Paul II before him (and Cardinal Ratzinger, as we will see below). But Pope Francis is clear that these arrangements (he and the Synod on the Family calls these “unions,” I think unwisely), cannot be anything even close to mimicking marriage. Pope Francis makes this clear in Amoris Laetitia, 251:

In discussing the dignity and mission of the family, the Synod Fathers observed that, “as for proposals to place unions between homosexual persons on the same level as marriage, there are absolutely no grounds for considering homosexual unions to be in any way similar or even remotely analogous to God’s plan for marriage and family”. It is unacceptable “that local Churches should be subjected to pressure in 275 Cf. Bull Misericordiae Vultus, 12: AAS 107 (2015), 407. 276 Catechism of the Catholic Church, 2358; cf. Relatio Finalis 2015, 76. 277 Ibid. 191 this matter and that international bodies should make financial aid to poor countries dependent on the introduction of laws to establish ‘marriage’ between persons of the same sex”.278

The real issue here centers on the prudence of using the term “unions.” And as a Catholic apologist (and as a Catholic in general), I am not in a position to be the Magisterium. I defend the Magisterium if I can do so. In this case, it is rather easy to do so. That is, it is easy to defend against the false claims that Pope Francis is promoting homosexual unions that in any way resemble marriage. That is simply not true. It is slanderous.

And as far as those who claim the pope is somehow speaking contrary to earlier magisterial teaching, this is simply not true either. He is merely reiterating what the Church has already taught magisterially. In fact, I find it a bit ironic that people quote then-Cardinal Ratzinger’s excellent magisterial work approved by Pope St. John Paul II, Considerations Regarding Proposals to Give Legal Recognition to Unions Between Homosexual Persons, to claim Pope Francis contradicts it when, in reality, Pope Francis quotes it as his authority from paragraph 4:

There are absolutely no grounds for considering homosexual unions to be in any way similar or even remotely analogous to God’s plan for marriage and family. Marriage is holy, while homosexual acts go against the natural moral law. Homosexual acts “close the sexual act to the gift of life. They do not proceed from a genuine affective and sexual complementarity. Under no circumstances can they be approved.

The amazing thing to me here is I have gone on record as saying I don’t agree with the use of the term “unions,” just as I did not agree with the use of “homosexual persons” by our last three popes. But this is not a matter of heresy. It is a matter of prudence. Do I think Cardinal Ratzinger, Pope St. John Paul II and Pope Francis were imprudent in using the term “homosexual unions” in the above-cited documents? Yes, I do. Homosexual sex is not “unitive” in any way. In fact, it represents an act of violence just as any act of sodomy does, whether it be between a married couple or between homosexuals. But as a Catholic, I state my position, recognizing that it may well be, and probably is so, that it is Tim Staples who is the imprudent one here, not the last three popes, and I then move on to explain what these last three popes actually meant in using the term “homosexual unions.” For all three of these great men of God, the terms were used to explain that these so-called “unions” cannot in any way attempt to mimic or to be recognized as anything even remotely analogous to marriage. Homosexual unions that mimic marriage are intrinsically disordered and can never be approved of in any context (CCC 2357). And for this I am being accused of supporting homosexual unions?

But what I have learned over the years is to just continue to defend the teachings of Jesus Christ as they are communicated through the Magisterium of the Church. God will take care of the rest. I am the least important part of the above scenario.

Is The RAPTURE In The Bible?