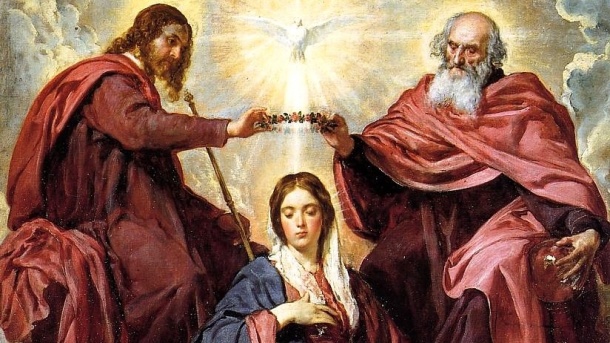 Pope Pius XII effectively summarized the core reasons Christians ought to honor Mary with the title of Queen of Heaven and Earth:

According to ancient tradition and the sacred liturgy the main principle on which the royal dignity of Mary rests is without doubt her divine motherhood. In holy writ, concerning the son whom Mary will conceive, we read this sentence: “He shall be called the son of the most high, and the Lord God shall give unto him the throne of David his father, and he shall reign in the house of Jacob forever, and of his kingdom there will be no end,” and in addition Mary is called “Mother of the Lord,” from this it is easily concluded that she is a queen, since she bore a son who, at the very moment of his conception, because of the hypostatic union of the human nature with the Word, was also as man, king and lord of all things. So with complete justice St. John Damascene could write: “When she became mother of the creator, she truly became queen of every creature.” Likewise, it can be said that the heavenly voice of the Archangel Gabriel was the first to proclaim Mary’s royal office (Ad Caeli Reginam, 34).

In my next blog post, I will give more positive reasons for faith in Mary as Queen of Heaven and Earth, but many Protestants I speak to cannot get past one biblical text from the Old Testament that casts a shadow over this topic like none other. In Roman Catholics and Evangelicals—Agreements and Differences, Norman Geisler and Ralph MacKenzie present that text along with their commentary that represents the misguided faith of millions. And that text is Jeremiah 7:18:

Do you not see what they are doing in the streets of Judah and in the streets of Jerusalem? The children gather wood, the fathers kindle fire, and the women knead dough, to make cakes for the queen of heaven; and they pour out drink offerings to other gods, to provoke me to anger.

To call Mary “Queen of Heaven,” knowing that this very phrase comes from an old pagan idolatrous cult condemned in the Bible (cf. Jer. 7:18), only invites the charge of Mariolatry. And Mariolatry is idolatry (p. 322).

I can certainly sympathize with their thinking here. I once thought the same. But the truth is: this text has absolutely nothing to do with the Blessed Mother as Queen of Heaven for at least three reasons:

Is Reincarnation in the Bible?

Did Tertullian and St. Augustine Deny the ...