Resurrection Of The Body 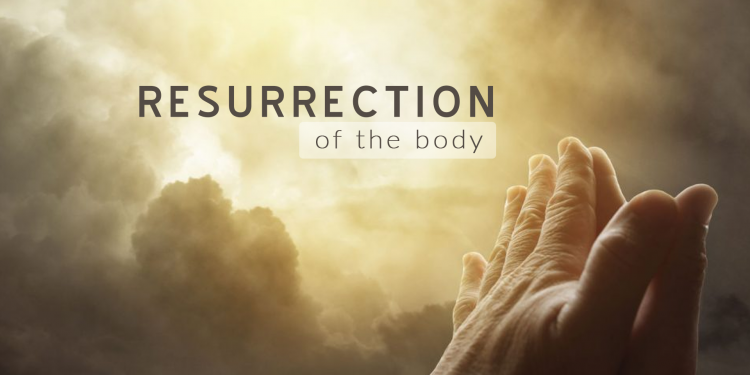 The Difference Between Spirit and Spiritual:
Essential to Understanding the Eucharist and the Resurrection

Jehovah’s Witnesses famously misunderstand St. Paul’s use of the terms “spiritual body” in I Cor. 15:44 in a similar way our Protestant friends generally misunderstand Jesus’ words in John 6:53: “It is the spirit that gives life, the flesh is of no avail; the words that I have spoken to you are spirit and life.” Notice, Jesus did not say, “my flesh is of no avail.” He said, “The flesh is of no avail.” There is a huge difference between the two! No one, it is safe to say, would have believed he meant my flesh avails nothing because he just spent a good portion of this same discourse telling us that his flesh would be “given for the life of the world” in John 6:51, as well as in verses 50-58 repeatedly. So what was he referring to? The flesh is a New Testament term often used to describe human nature apart from God’s grace.

For example, Christ himself said to the apostles in the Garden of Gethsemane, “Watch and pray that you may not enter into temptation; the spirit indeed is willing, but the flesh is weak” (Mark 14:38). According to St. Paul, if we are in “the flesh,” we are “hostile to God” and “cannot please God” in Romans 8:1-14. In I Cor. 2:14, he tells us, “The unspiritual man does not receive the gifts of the Spirit of God, for they are folly to him, and he is not able to understand them because they are spiritually discerned.” And then, if you read down to I Cor. 3:1, St. Paul goes on to say, “But I, brethren, could not address you as spiritual men, but as men of the flesh, as babes in Christ.”

The bottom line here is it requires supernatural grace in the life of the believer in order for him to believe the radical declaration of Christ concerning the Eucharist. As Jesus himself said both before and after this “hard saying,” in both verse 44 and in verse 65 of John 6, “No one can come to me unless the Father who sent me draw him.” In other words, belief in the Eucharist is a gift of grace. The natural mind—or the one who is in “the flesh”—will never be able to understand and accept this great Christian truth.

On another level very closely related to my last point, Jesus also said, “It is the spirit that gives life, the flesh is of no avail,” because he wills to eliminate any possibility of a sort of crass literalism that would reduce his words to any kind of cannibalistic understanding. It is the Holy Spirit that will accomplish the miracle of Christ being able to ascend into heaven bodily while being able simultaneously to distribute his body and blood in the Eucharist for the life of the world. A human body, even a perfect one, apart from the power of the Spirit could not accomplish this.

So here is the key: that which is “spiritual” does not necessarily equate to that which has no material substance. This is really closer to a gnostic understanding of “spiritual” than a Christian one. “Spiritual” often means simply that which is dominated or controlled by the Spirit. Unfortunately, some—usually quasi-Christian sects like Jehovah’s Witnesses—end up taking this understanding to the next level when it comes to the resurrection of the body. If the word “spiritual” cannot involve the material, well, not only does one lose the truth of the Eucharist in John 6, but when St. Paul says of the resurrection of the body, “It is sown a physical body, it is raised a spiritual body” (I Cor. 15:44), this would have to mean we will not have a physical body in the resurrection, right?

Can you see now how this error becomes devastating to two essential dogmas of the Faith? The Eucharist and the resurrection of the body.

Let us focus now on the resurrection of the body. This is really quite simple to clear up because our Lord himself made quite clear after his own resurrection in Luke 24:39 that he possessed a body that was spiritual to be sure, but it also was and is a body of “flesh and bone:”

See my hands and my feet, that it is I myself; handle me, and see; for a spirit has not flesh and bones as you see that I have.

The resurrected body is spiritual, and indeed, St. Paul refers to strong Christians as “spiritual” as we saw before in I Cor. 3:1. Inasmuch as a Christian is controlled by the Spirit of God, he is “spiritual.” This, in no way means void of the material. That would, again, be more Gnostic than Christian in understanding. To put this simply, I have found the confusion here is often based upon a failure to properly distinguish between “spirit,” or “spiritual,” being used as an adjective, verses “spirit” used as a noun. When “spirit” is used as a noun, e.g., “God is spirit” in John 4:24, or angels are “messenger spirits” in Heb. 1:14, it then most often refers to that which is not material. However, when used as an adjective denoting “spiritual,” it is not necessarily referring to the absence of the material; rather, it is referring to simply being controlled, or led, by the Spirit. In John 6:63, “spirit” is used as an adjective to describe Jesus words, not as a noun. Christ’s words, he says, “are spirit and life.” In other words, they are spiritual. This does not necessarily mean they are representing something that is void of materiality.

And when it comes to the resurrection of the body, I Cor. 15:43-50, we see how the resurrected body will be “spiritual” because it will be entirely controlled by the Spirit, so much so, that it will go from perishable to imperishable, just like the body of Jesus:

So is it with the resurrection of the dead. What is sown is perishable, what is raised is imperishable. 43 It is sown in dishonor, it is raised in glory. It is sown in weakness, it is raised in power. 44 It is sown a physical body, it is raised a spiritual body. If there is a physical body, there is also a spiritual body. 45 Thus it is written, “The first man Adam became a living being”; the last Adam became a life-giving spirit. 46 But it is not the spiritual which is first but the physical, and then the spiritual. 47 The first man was from the earth, a man of dust; the second man is from heaven. 48 As was the man of dust, so are those who are of the dust; and as is the man of heaven, so are those who are of heaven. 49 Just as we have borne the image of the man of dust, we shall also bear the image of the man of heaven. 50 I tell you this, brethren: flesh and blood cannot inherit the kingdom of God, nor does the perishable inherit the imperishable.

“Flesh and blood” refers to the body that is not entirely controlled by the Spirit. It is still subject to the temptations and various weaknesses—both spiritual and physical—that arise from our fallen natures. And that is why it is subject to death. But in the resurrection, all of that goes away. St. Paul continues:

Lo! I tell you a mystery. We shall not all sleep, but we shall all be changed, 52 in a moment, in the twinkling of an eye, at the last trumpet. For the trumpet will sound, and the dead will be raised imperishable, and we shall be changed. 53 For this perishable nature must put on the imperishable, and this mortal nature must put on immortality. 54 When the perishable puts on the imperishable, and the mortal puts on immortality, then shall come to pass the saying that is written: “Death is swallowed up in victory.” 55 “O death, where is thy victory? O death, where is thy sting?” 56 The sting of death is sin, and the power of sin is the law. 57 But thanks be to God, who gives us the victory through our Lord Jesus Christ.

The Resurrection: An Historical Fact