The Eucharist in John 6 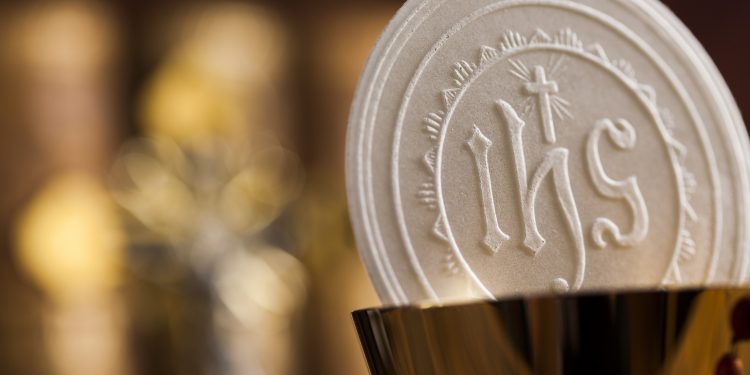 For millions of non-Catholic Christians, Jesus was using pure symbolism in John 6:53 when he declared to his followers, “Truly, truly, I say to you, unless you eat the flesh of the Son of man and drink his blood, you have no life in you.” The reasons non-Catholics give can usually be boiled down to these: First, a literal interpretation would make Christians into cannibals. Second, Jesus claims to be a “door” in John 10:9 and a “vine” in John 15:5. Do Catholics believe they must pluck a leaf from Jesus the vine or oil the hinges on Jesus the door to get into heaven? So the non-Catholic claims Jesus is using metaphor in John 6, just as he does elsewhere in the Gospels.

For a more in-depth consideration of this topic, I recommend you read my article titled, “Is the Eucharist Cannibalism,” here.  But for our purpose now, the charge of cannibalism does not hold water for at least three reasons. First, Catholics do not receive our Lord in a cannibalistic form. Catholics receive him in the form of bread and wine. The cannibal kills his victim; Jesus does not die when he is consumed in Communion. Indeed, he is not changed in the slightest; the communicant is the only person who is changed. The cannibal eats part of his victim, whereas in Communion the entire Christ is consumed—body, blood, soul, and divinity. And the cannibal sheds the blood of his victim; in Communion our Lord gives himself to us in a non-bloody way.

Second, if it were truly immoral in any sense for Christ to give us his flesh and blood to eat, it would be contrary to his holiness to command anyone to eat his body and blood—even symbolically. Symbolically performing an immoral act would be of its nature immoral.

Moreover, the expressions to eat flesh and to drink blood already carried symbolic meaning both in the Hebrew Old Testament and in the Greek New Testament, which was heavily influenced by Hebrew. In Psalm 27:1-2, Isaiah 9:18-20, Isaiah 49:26, Micah 3:3, and Revelation 17:6-16, we find these words (eating flesh and drinking blood) understood as symbolic for persecuting or assaulting someone. Jesus’ Jewish audience would never have thought he was saying, “Unless you persecute and assault me, you shall not have life in you.” Jesus never encouraged sin. This may well be another reason why the Jews took Christ at his word in John 6.

If Jesus was speaking in purely symbolic terms, his competence as a teacher would have to be called into question. No one listening to him understood him to be speaking metaphorically. Contrast his listeners’ reaction when Jesus said he was a “door” or a “vine.” Nowhere do we find anyone asking, “How can this man be a door made out of wood?” Or, “How can this man claim to be a plant?” When Jesus spoke in metaphor, his audience seems to have been fully aware of it.

When we examine the surrounding context of John 6:53, Jesus’ words could hardly have been clearer. In verse 51, he plainly claims to be “the living bread” that his followers must eat. And he says in no uncertain terms that “the bread which I shall give . . . is my flesh.” Then, when the Jews were found “disput[ing] among themselves, saying, ‘How can this man give us his flesh to eat?’” in verse 52, he reiterates even more emphatically, “Truly, truly, I say unto you, unless you eat the flesh of the Son of man and drink his blood, you have no life in you.”

Compare this with other examples in Scripture when followers of the Lord are confused about his teaching. In John 4:32, Jesus says: “I have food to eat of which you do not know.” The disciples thought Jesus was speaking about physical food. Our Lord quickly clears up the point using concise, unmistakable language in verse 34: “My food is to do the will of him who sent me, and to accomplish his work” (see also Matthew 16:5-12).

Moreover, when we consider the language used by John, a literal interpretation—however disturbing—becomes even more obvious. In John 6:50-53 we encounter various forms of the Greek verb phago, “eating.” However, after the Jews begin to express incredulity at the idea of eating Christ’s flesh, the language begins to intensify. In verse 54, John begins to use trogo instead of phago. Trogo is a decidedly more graphic term, meaning “to chew on” or to “gnaw on”—as when an animal is ripping apart its prey.

Then, in verse 61, it is no longer the Jewish multitudes, but the disciples themselves who are having difficulty with these radical statements of our Lord. Surely, if he were speaking symbolically, he would clear up the difficulty now among his disciples. Instead, what does Jesus do? He reiterates the fact that he meant just what he said: “Do you take offense at this? Then what if you were to see the Son of man ascending where he was before?” (61-62). Would anyone think him to have meant, “What if you were to see me symbolically ascend?” Hardly! The apostles, in fact, did see Jesus literally ascend to where he was before (see Acts 1:9-10).

Finally, our Lord turns to the twelve. What he does not say to them is perhaps more important than what he does say. He doesn’t say, “Hey guys, I was misleading the Jewish multitudes, the disciples, and everyone else, but now I am going to tell you alone the simple truth: I was speaking symbolically.” Rather, he says to them, “Will you also go away?” (v. 67). This most profound question from our Lord echoes down through the centuries, calling all followers of Christ in a similar fashion. With St. Peter, those who hear the voice of the Shepherd respond: “Lord, to whom shall we go? You have the words of eternal life” (v. 68).

John 6:63 is the one verse singled out by Protestant apologists to counter much of what we have asserted thus far. After seeing the Jews and the disciples struggling with the radical nature of his words, our Lord says to the disciples and to us all: “It is the spirit that gives life, the flesh is of no avail; the words that I have spoken to you are spirit and life.” Protestants claim Jesus here lets us know he was speaking symbolically or “spiritually” when he said “the spirit gives life, the flesh is of no avail.” See? He is not giving us his flesh to eat because he says, “the flesh is of no avail.” How do we respond? We can in several ways.

1) If Jesus was clearing up the point, he would have to be considered a poor teacher: Many of the disciples left him immediately thereafter because they still believed the words of our Lord to mean what they said.

2) Most importantly, Jesus did not say, “My flesh is of no avail.” He said, “The flesh is of no avail.” There is a rather large difference between the two. No one, it is safe to say, would have believed he meant my flesh avails nothing because he just spent a good portion of this same discourse telling us that his flesh would be “given for the life of the world” (Jn 6:51, cf. 50-58). So to what was he referring? The flesh is a New Testament term often used to describe human nature apart from God’s grace.

For example, Christ said to the apostles in the Garden of Gethsemane, “Watch and pray that you may not enter into temptation; the spirit indeed is willing, but the flesh is weak” (Mk 14:38). According to Paul, if we are in “the flesh,” we are “hostile to God” and “cannot please God” (cf. Rom 8:1-14). In First Corinthians 2:14, he tells us, “The unspiritual man does not receive the gifts of the Spirit of God, for they are folly to him, and he is not able to understand them because they are spiritually discerned.” In First Corinthians 3:1, Paul goes on, “But I, brethren, could not address you as spiritual men, but as men of the flesh, as babes in Christ.” It requires supernatural grace in the life of the believer to believe the radical declaration of Christ concerning the Eucharist. As Jesus himself said both before and after this “hard saying”: “No one can come to me unless the Father who sent me draws him” (Jn 6:44, cf. 6:65). Belief in the Eucharist is a gift of grace. The natural mind—or the one who is in “the flesh”—will never be able to understand this great Christian truth.

3) On another level very closely related to our last point, Christ said, “It is the spirit that gives life, the flesh is of no avail,” because he wills to eliminate any possibility of a sort of crass literalism that would reduce his words to a cannibalistic understanding. It is the Holy Spirit that will accomplish the miracle of Christ being able to ascend into heaven bodily while being able simultaneously to distribute his body and blood in the Eucharist for the life of the world. A human body, even a perfect one, apart from the power of the Spirit could not accomplish this.

4) That which is spiritual does not necessarily equate to that which has no material substance. It often means that which is dominated or controlled by the Spirit.

One thing we do not want to do as Christians is to fall into the trap of believing that because Christ says his words are “spirit and life,” or “spiritual,” they cannot involve the material. When speaking of the resurrection of the body, St. Paul wrote: “It is sown a physical body, it is raised a spiritual body” (1 Cor 15:44). Does this mean we will not have a physical body in the resurrection? Of course not. In Luke 24:39, Jesus made that clear after his own Resurrection: “See my hands and my feet, that it is I myself; handle me, and see; for a spirit has not flesh and bones as you see that I have.”

The resurrected body is spiritual, and indeed we can be called “spiritual” as Christians inasmuch as we are controlled by the Spirit of God. Spiritual in no way means void of the material. That interpretation is more gnostic than Christian. The confusion here is most often based upon confusion between spirit—a noun—and the adjective spiritual. When spirit is used, e.g., “God is spirit” in John 4:24, it is then referring to that which is not material. However, the adjective spiritual is not necessarily referring to the absence of the material; rather, it is referring to the material controlled by the Spirit.

Was the Woman Caught in Adultery Original ...

Transgenderism – How’d We Get Here?