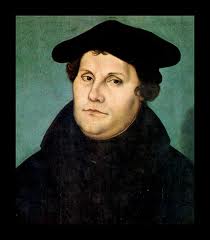 It is no secret that Martin Luther eliminated all works as having anything to do with our justification/salvation. In what most call his “greatest work,” The Bondage of the Will, Luther commented on St. Paul’s Letter to the Romans:

The assertion that justification is free to all that are justified leaves none to work, merit or prepare themselves… For if we are justified without works, all works are condemned, whether small or great; Paul exempts none, but thunders impartially against all.

St. Paul was answering “Judaizers”—believers in Christ who were attempting to re-establish the law of the Old Covenant as necessary for salvation in the New. This was tantamount to forfeiting Christ, or rejecting the free gift, because it represented an attempt to be justified apart from Christ. Paul says, in Galatians 5:4-7 and 2:18, those Christians who were being led astray in this way had “fallen away from grace” precisely because they were attempting to “build up again” the law that had been “torn down” through the cross of Christ.

You are severed from Christ, you who would be justified by the law; you have fallen away from grace. For through the Spirit, by faith, we wait for the hope of righteousness. For in Christ Jesus neither circumcision nor uncircumcision is of any avail, but faith working through love. You were running well; who hindered you from obeying the truth (Gal. 5:4-7)?

For St. Paul, any works done either before entering into Christ or apart from Christ profit nothing. But works done in Christ are a different story. Before Christ, unregenerate men are “dead in trespasses and sins,” and “by nature children of wrath,” as Paul writes in Ephesians 2:1-3. But after entering into Christ, Phillipians 4:13 says, “I can do all things in [Christ] who strengthens me.” And according to Romans 2:6-7, “all things” includes meriting eternal life.

Unfortunately, Luther’s error did not cease with bad exegesis of St. Paul. As is so often the case, one error leads not just to one more but to a litany. For example, Luther was so consumed with the notion that man can have nothing to do with his own salvation—no works—he claimed any belief that man must actively cooperate in salvation at all to be equivalent to a denial of the sufficiency of Christ’s sacrifice. In one of his sermons, Luther declared:

[Catholics] know very well how to say of him: I believe in God the Father, and in his only begotten Son. But it is only upon the tongue, like the foam on the water; it does not enter the heart. Figuratively a big tumor still remains there in the heart; that is, they cling somewhat to their own deeds and think they must do works in order to be saved—that Christ’s person and merit are not sufficient. . . . They say, Christ has truly died for us, but in a way that we, also, must accomplish something by our deeds. Notice how deeply wickedness and unbelief are rooted in the heart.

Saying man must “accomplish something” in Christ does not deny the sufficiency of Christ’s sacrifice; it merely states, in agreement with St. John no less, that man must, among other things, “walk in the light” of Christ in order for Christ’s all-sufficient sacrifice to become efficacious in his life:

If we walk in the light, as he is in the light, we have fellowship with one another, and the blood of Jesus his Son cleanses us from all sin… If we confess our sins, he is faithful and just, and will forgive our sins and cleanse us from all unrighteousness (I John 1:7-9).

Notice, we must walk, and we must confess.

In The Bondage of the Will, Luther takes the next logical step in denying works to be involved in salvation in any sense by declaring man’s will to be absolutely passive when it comes to salvation; and consequent to that, he expressly denies the truth of man’s free will:

Luther’s famous notion of simul justus et peccator (“at the same time just and sinner”) is another error rooted in leaving man completely out of the equation when it comes to his own justification. It means, in effect, man’s justification is accomplished extrinsic to him. God declares a man just via a divine, forensic declaration—a legal fiction—rather than the biblical notion of a real inward transformation that makes him truly and inwardly just (cf. II Cor. 5:17; Eph. 4:24).

Moreover, if it is grave error to acknowledge man has a causal role in his own salvation, claiming other members of the body of Christ have a role would be equally errant. There goes an essential element of the communion of saints. St. Paul obviously did not get the memo here, because he wrote: “Take heed to yourself and to your teaching; hold to that, for by so doing you will save both yourself and your hearers” (I Tim. 4:16).

There are many other errors we could add to this litany of Lutheran misstandings, but what I would argue to be Luther’s most egregious errors came as a direct consequence of his denial of free will. Think about it. If you deny free will, but you also teach that at least some people will end up in hell—and Luther did just that—then it necessarily follows that God does not will all to be saved. This is logical if you accept Luther’s first principles. The problem is it runs contrary to plain biblical texts like I Tim. 2:4: “God wills all to be saved” (see also II Peter 3:9: I John 2:1-2), and Matthew 23:37, which records the words of our Lord himself:

O Jerusalem, Jerusalem, killing the prophets. . . . How often would I have gathered your children . . . and you would not!

Interestingly enough, in The Bondage of the Will, Luther attempts a response to this last text that becomes quite telling:

Here, God Incarnate (sic) says: “I would and thou wouldst not.” God Incarnate (sic), I repeat, was sent for this purpose, to will, say, do, suffer, and offer to all men, all that is necessary for salvation; albeit he offends many who, being abandoned or hardened by God’s secret will of Majesty, do not receive Him thus willing, speaking, doing, and offering. . . . It belongs to the same God incarnate to weep, lament, and groan over the perdition of the ungodly, though that will of Majesty purposely leaves and reprobates some to perish.

So what is Luther’s response to Jesus’ obvious willing all to be saved? Certainly, he would acquiesce to the Master and acknowledge God’s universal salvific will, would he not? After all, Jesus Christ is, in one sense, the will of God manifest in the flesh. Unfortunately not. Luther claimed Christ’s human knowledge to be lacking when it came to understanding “God’s secret will of Majesty,” which led our Lord’s human will to find itself in opposition to the divine will. Poor Jesus. If he only knew what Luther knew.

We could multiply texts like “He who has seen me has seen the Father” (John 14:9), or “No one knows the Father except the Son” (Matt. 11:27) that render this kind of thinking untenable. We could talk about the Hypostatic Union. But that would go beyond what we can do in this short post.

In the final analysis, we see here in Martin Luther the old addage, error begets error, painfully pellucid. What began in denying man has anything to do with his own salvation ends with problems Christological stretching from here to eternity . . . literally.

Is Pope Francis the Final Pope?