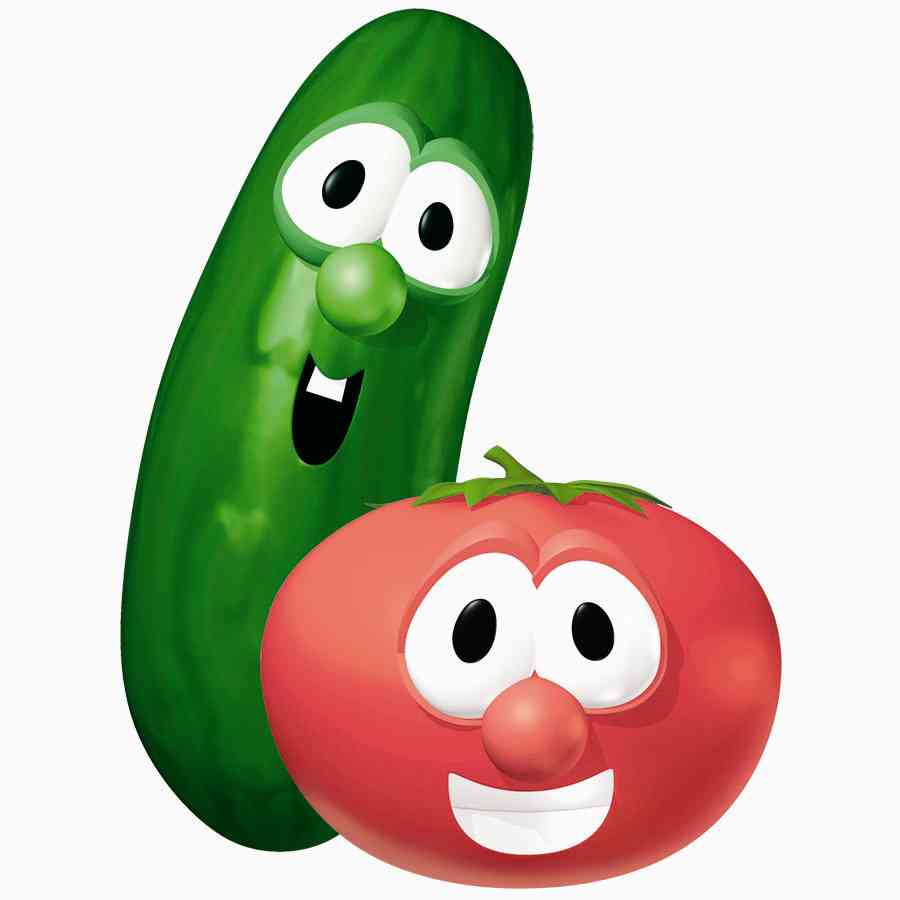 Actually, some of the kids’ movies we have are really good. And among my favorites are the Veggie Tales series of movies and television shows. The characters are all vegetables of differing sorts, e.g., celery, broccoli, etc., and the themes are always Christian with a moral to challenge young people to walk with the Lord in their everyday lives. There is no doubt that the writers of the series knew parents would be watching because there is no lack of humor mixed in that is obviously aimed at an older audience, but overall these episodes are extremely well done and my kids absolutely love them.

Having said that, however, the theology in some of these DVD’s is found wanting. In one episode, for example, titled “Minnesota Cuke,” Jr. Asparagus and his friends are bullied by a bigger kid (a giant squash, no less) on the playground. He demands them all to leave “or else,” and tells them they can never come back without his permission first.

When Jr. asks his father for advice, his father tells him we must “turn the other cheek,” meaning, we just have to “get pounded” sometimes and take it because that is what Jesus taught in the Sermon on the Mount. Thus, Jr. and his friends “stand up to the bully” by informing him that he will have to beat all of them up because none of them will fight back, but none of them will oblige him in his demands either.

The good news is, of course, that the bully can’t bring himself to beat all of them up so he backs down with his demands and all is well that ends well.

After watching this, I thought, “What a horrible lesson to teach children!” Does Jesus really mean that we have to be doormats as Christians and let anyone who so wills to “pound us” at will? Even kill us?

The Catholic and Biblical Response to Sr. Asparagus

In an earlier blog post, I pointed out another verse, Matt. 7:1, that is similarly misused from this same Sermon on the Mount: “Judge not lest you be judged.” I argued this may well be the most misunderstood verse in all of Sacred Scripture. Well, the “turn the other cheek” passage from Matthew 5:39 is unfortunately not far behind and misunderstood today by large numbers of both Christians and non-Christians alike.

The truth is: Jesus was using a common rabbinical teaching tool known as “hyperbole” in order to accentuate an important point. He did not intend that line to be taken in a strict, literal, and absolute sense. In fact, Jesus uses hyperbole throughout the Sermon on the Mount. For some reason, the “judge not” and “turn the other cheek” passages get an inordinate amount of air-time. But here are some other examples that are not as well known:

Do we really think Jesus wants us to pluck out our eyes and throw them away? No! He is speaking hyperbole to emphasize the fact that we must eliminate all obstacles to serving God.

Is anyone out on the stump (bad pun, I know) encouraging folks to cut off hands in the name of Jesus?

Jesus himself honored the oath the High Priest placed him under in Matt. 26:63: “I adjure thee by the living God, tell us if you are the Christ, the Son of God” (in Leviticus 5:1, we have a reference to the “oath of adjuration” where the High Priest is revealed to have the authority to place someone under an oath to testify). If Jesus taught oaths to be unlawful or immoral, he would not have responded or he would have protested and made clear that he did not agree with the concept of oaths.

St. Paul swore oaths, or at least did not present everything as a simple “yes” or “no” as Jesus said in Matt. 5:37, in multiple places in the New Testament (see Phil. 1:8; II Cor. 1:23; 11:31; 12:19; Gal. 1:20). Jesus’ actual meaning was that oaths should not be necessary among the faithful because we should be known for our honesty; however, because of the evil that exists in the world oaths are very necessary. But you don’t get this from the actual words of Matt. 5.

Do we really believe Jesus meant we have to loan or give money to anyone and everyone who asks us? All Christians would be broke and unable to raise families! No! He uses hyperbole in teaching Christians should be known for their generosity.

Did Jesus really mean no one should ever know what we give? Then why would Jesus have commended the poor widow who gave the now famous “widow’s mite” in Mark 12:42-43? Or, why would the apostles have had a very public display of giving in Acts 5 when Ananias and Saphira were condemned for lying about how much they actually gave? This implies that everyone knew what each was giving!

The truth is, Christ was emphasizing that we should give for love of God and neighbor’s sake, not to be seen of men as a matter of pride.

Jesus was here using hyperbole to emphasize that prayer should never be a performance to be seen by men.

8. Do not lay up treasures for yourselves on earth, where moth and rust consume and where thieves break in and steal, but lay up for yourselves treasure in heaven… (6:19-20)

Do we really believe that Jesus condemned banks and bank accounts here? This would hardly square with Jesus’ “Parable of the Talents,” in Matt. 25:27: “Then you ought to have invested my money with the bankers, and at my coming I should have received what was my own with interest.”

9. … do not be anxious about your life, what you shall eat, or what you shall drink… Look at the birds of the air: they neither sow nor reap nor gather into barns, and yet your heavenly Father feeds them. Are you not of more value than they (6:25-26)?

10. And why are you anxious about clothing? Consider the lilies of the field, how they grow; they neither toil nor spin; yet I tell you, even Solomon in all his glory was not clothed like one of these… will [God] not much more clothe you, O you of little faith (6:28-30)?

If we are going to argue that “turn the other cheek” (or “judge not”) must be taken in a strict, literal, and absolute sense, then it would seem we would also have to say Jesus is condemning farms, farming, or even planting seeds to grow food in these verses. After all, the birds don’t do that and God takes care of them!

Jesus would also be condemning the making of clothing. I suppose we should all remain naked and wait for God to clothe us, right?

Now, this last may seem really ridiculous. We all know God is condemning forgetting about our Lord and his providence in all of these affairs. But if we are going to take some of the Sermon on the Mount in a strict, literal sense, why not all of it?

The entire Sermon on the Mount can be summed up in tthree texts: First, Matt. 5:16: “Let your light so shine before men, that they may see your good works and give glory to your Father who is in heaven.” Second, Matt. 5:44-48: “Love your enemies and pray for those who persecute you, so that you may be sons of your Father who is in heaven; for he makes his sun rise on the evil and on the good, and sends rain on the just and on the unjust. For if you love those who love you, what reward have you?… You, therefore, must be perfect, as your heavenly Father is perfect.” And third, Matthew 6:33: “But seek first his kingdom and his righteousness, and all these things shall be yours as well.” Jesus uses radical language to say we must put God first in every aspect of our lives, we must love everyone, and let the world see how different we are because of who we follow.

So when it comes to turn the other cheek, Jesus is not saying we should be doormats and pacifists. In fact, Jesus himself makes this clear in Luke 22:36-38 when he tells the apostles to “take up a sword” for self-defense. And while it is true that Jesus tells St. Peter to put away his sword later in verses 50-51, this was only after Peter lashed out offensively and against Jesus’ manifest will. Jesus had already told the apostles that it was God’s will that he suffer and die (see Luke 9:44; 18:32, etc.). Peter was acting contrary to Jesus’ revealed will. But this does not negate the fact that it was Jesus himself that told Peter and the apostles to take up a sword to begin with. This implies the liceity of legitimate self-defense.

Jesus also praises the faith of the Roman centurion in Matt. 8:8ff. Never does he say that serving in the military is wrong, which it would be if he was teaching pacifism. The truth is: Jesus was using hyperbole once again in order to tell us that we are to be peace-makers. We should always seek peace even though sometimes self-defense or even war becomes necessary (cf. Eccl. 3:3, 8).

Are All Christians Saints?

Are the Ashes of “Ash Wednesday” Contrary ...