Were Joseph and Mary Married at the Time of the Annunciation? 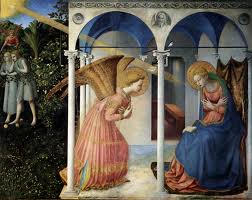 In my new book, Behold Your Mother – A Biblical and Historical Defense of the Marian Doctrines, I tackle about every objection to the Marian doctrines out there. One of these is the question of the annunciation as it relates to Mary’s famous response to the angel Gabriel.

When the Archangel Gabriel visited Mary and declared unto her that she was called to be the Mother of God, as we see recorded in Luke 1, her response would become the cause of the spilling of a whole lot of ink over the centuries: “How shall this happen, since I know not man?” (v. 34, Douay Rheims, Confraternity Edition).

For Catholics this is an indication of Mary’s vow of perpetual virginity. It’s really quite simple. If Mary and Joseph were just an ordinary couple embarking on a normal married life together, there would be no reason to ask the question. Mary would have known very well how it could be that the angel was saying she would have a baby. As St. Augustine said it:

Had she intended to know man, she would not have been amazed. Her amazement is a sign of the vow (Sermon 225, 2).

But Protestants do not see it as quite so simple. Reformed Apologist James White gives us an example of the most common objection to our “Catholic” view of this text:

Nothing about a vow is mentioned in Scripture. Mary’s response to the angel was based upon the fact that it was obvious that the angel was speaking about an immediate conception, and since Mary was at that time only engaged to Joseph, but not married, at that time she could not possibly conceive in a natural manner, since she did not “know a man” (Mary—Another Redeemer? p. 31.).

Among the errors in just these two sentences (I counted four), there are two that stand out for our purpose here.

There was no such thing as “engagement” (as it is understood in modern Western culture) in ancient Israel. The text says Mary was “betrothed” or “espoused” (Gr.—emnesteumene), not engaged. Betrothal, in ancient Israel, would be akin to the ratification of a marriage (when a couple exchanges vows in the presence of an official witness of the Church) in Catholic theology. That ratified marriage is then consummated—in the normal course—on the couple’s wedding night. So when Luke 1:27 says Mary was betrothed, it means they were already married at the time of the annunciation. If this were an ordinary marriage, St. Joseph would then have had a husband’s right to the marriage bed—the consummation.

This simple truth proves devastating to Mr. White’s (and the Protestant’s) argument. If Joseph and Mary were married—and they were—and they were planning the normal course, Mary would have known full and well how she could and would have a baby. As St. Augustine said, the question reveals the fact that this was not just your average, ordinary marriage. They were not planning to consummate their union.

For those who are not convinced “betrothed” equals “married” for Mary and Joseph; fortunately, the Bible makes this quite clear. If we move forward in time from the “annunciation” of Luke 1 to Matthew 1 and St. Joseph’s discovery of Mary’s pregnancy, we find Matthew 1:18 clearly stating Mary and Joseph were still “betrothed.” Yet, when Joseph found out Mary was “with child,” he determined he would “send her away privately” (vs. 19). The Greek verb translated in the RSVCE to send away is apolusai, which means divorce. Why would Joseph have to divorce Mary if they were only “engaged?”

Further, the angel then tells Joseph:

Do not fear to take Mary your wife, for that which is conceived in her is of the Holy Spirit . . . When Joseph woke from sleep, he did as the angel of the Lord commanded him; he took his wife (vss. 20-24).

Notice, Joseph took Mary “his wife,” indicating both St. Matthew and an archangel considered this couple married even though they were said to be “betrothed.” “Betrothed” is obviously much more than “engaged.”

Moreover, months later we find Joseph and Mary travelling together to Bethlehem to be enrolled as a family according to the decree of Caesar Augustus, just before Jesus would be born. They were obviously married; yet, even then, they were still said to be “betrothed” (see Luke 2:5).

So let’s recap what have we have uncovered. First, Joseph had already taken his espoused “wife” into his home and was caring for her. Second, Scripture reveals him to be her legal husband and to have travelled with Mary to be enrolled with her as a lawfully wedded couple and family. Third, she was called St. Joseph’s “wife” by the angel of the Lord… and yet, they were still referred to as “betrothed.”

Referring to Mary and Joseph as “engaged” in the face of all of this evidence would be like calling a modern couple at their wedding reception “engaged” because they have yet to consummate their marriage.

Once the fact that Mary and Joseph were already married at the time of the annunciation is understood, Mary’s “How shall this happen…” comes more into focus. Think about it: If you were a woman who had just been married (your marriage was “ratified,” but not consummated) and someone at your reception said—or “prophesied”—that you were going to have a baby—that would not really be all that much of a surprise. That is the normal course of events. You marry, consummate the union, and babies come along. You certainly would not ask the question, “Gee, how is this going to happen?” It is in this context of Mary having been betrothed, then, that her question does not make sense… unless, of course, you understand she had a vow of virginity. Then, it makes perfect sense.

Error #2: Mr. White claimed, “…it was obvious that the angel was speaking about an immediate conception.” And, closely related to this, Mr. White then claimed Mary asked the question, “How shall this happen…?” because she knew “at that time she could not conceive in a natural manner?”

Really? It was obvious?

There is not a single word in this text or anywhere else in Scripture that indicates Mary knew her conception was going to be immediate and via supernatural means. That’s why she asked the question, “How shall this happen…?” It appears she did not know the answer. How could she? Why would it ever enter into her mind? There would be no way apart from a revelation from God that she could have known. And most importantly, according to the text, the angel did not reveal the fact that Mary would conceive immediately and supernaturally until after Mary asked the question.

One final thought: When Mary asked the question, “How shall this happen, since I do not know man,” the verb to be (Gr.-estai) is in the future tense. There is nothing here that would indicate she was thinking of the immediate. The future tense here most likely refers to… the future. The question was not how she could conceive immediately. The question was how she could conceive ever. The angel answered that question for her.