What is Natural Law?﻿ 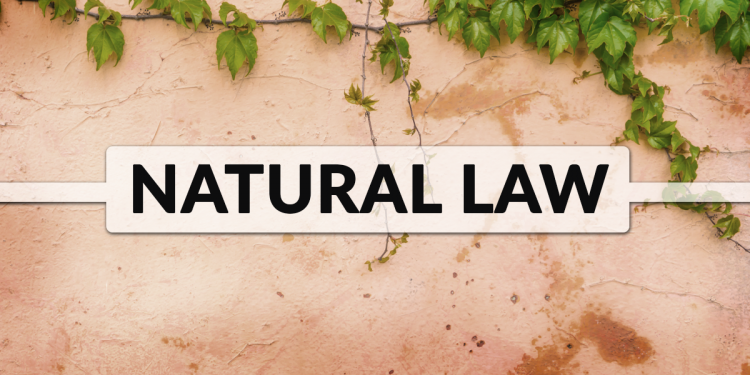 What is Natural Law?

On “Catholic Answers Live” recently, I received a call from a fellow who said to me: “Natural law makes no sense to me. For example, if I have a night job so that I have to sleep during the day and stay up at night, am I sinning because I am acting ‘contrary to nature’ that would have us sleep during the night?”

On another occasion, a caller asked: “Since we see other creatures, like the bonobo ape, that routinely engage in ‘same-sex’ sexual contact, wouldn’t that indicate natural law to teach homosexual acts are both acceptable and good?”

These two young men asked very good questions. And their questions had at least one common denominator. Neither was rejecting Natural law. They were each rejecting a straw man. And I have found over the years there to be millions like them. Indeed, each year we receive, perhaps, hundreds of similar inquiries. And the key to answering questions like this is to first make clear what Natural law actually is—contra distinct from the many caricatures you will find in the blogosphere.

Natural law is nothing more than man’s rational participation in the Eternal Law of God, which is God himself. Just by that definition, we eliminate all other creatures of earth from consideration when it comes to Natural law. Only man is rational among earth-dwellers. So Natural law does not apply when speaking of bonobo monkeys or any other non-rational creatures.

One down, one to go!

By way of preambles, or first principles, Natural law is based on two essential truths. First, God created all things “good” and for “the good.” And that is true for all creatures, even the non-rational. The oak tree, for example, is ordered toward its own good as seen by its nature. It has roots that sink deeply into the soil beneath it to absorb water and nutrients for its good. Its branches and leaves extend outwardly so it can receive the life-giving rays of the sun for photosynthesis. This is all designed into the plant and the plant can do nothing to hinder this that is God’s wholly good plan for it.

Second, and at the level of nature, we can see that man has natural inclinations to know, to will, to live in community, to procreate, and to preserve the self. These are designed into him like the above-mentioned gifts God gave to the oak tree. But here is the rub: Man can choose to act contrary to the above-mentioned and God-given inclinations that are good for him. Natural law tells man to “do good (what is in keeping with his natural and good inclinations) and avoid evil” (that which is contrary to his good and natural inclinations).

Given these basic starting points, we can conclude two things concerning our two callers. First, even though we have already dismissed the bonobo ape as a paradigm for Natural law, our above-mentioned caller had another and obvious question lurking beneath—or not so much beneath—his question concerning the relationship between bonobo monkeys and Natural law. He was obviously attempting to justify homosexual acts as morally upright among human beings. This is grave error. And this is why:

One of the natural inclinations we have as human being is to procreate. And the sexual act is essential to the equation. When we examine the sexual act from a Natural law perspective, we discover the act to be ordered to two essential ends: the procreation and education of children, and the mutual perfection or union of one man and one woman. These are the essentially good ends toward which the act is ordered. Any use of the sexual faculty that purposely thwarts either of these essential ends gravely disordered the conjugal act. I say “gravely” so because this act is not only sacred from a Christian perspective because it becomes a sacramental manifestation of the love of Christ for his bride, the Church (see Eph. 5:19-32), but it is also essential for the preservation and thriving of the human species on a natural level. From either perspective, a purposeful thwarting of the essential ends of the sexual act gravely distorts the purpose of the sexual act.

But what about whether a man sleeps during the day or at night? Ordinarily, this would have nothing to do with a man acting contrary to his nature. Now, if a person were to purposely deprive himself of sleep with the intention of causing his own death, that would be contrary to the essential inclination to preserve the self. That would be sin. But to sleep during the day in order to work at night in this scenario is actually in keeping with man’s natural inclinations of preserving the self (you’ve got to work in order to eat), living in community (you’ve got to work to pay the mortgage), and it is a clear case of a man using his intellect and will for this good and noble purpose.

Contraception is contrary to Sacred Scripture